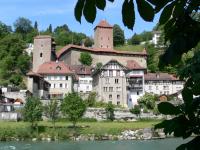 The chapel St. Bartholomew at the crossroads on the “Schönberg” is the starting point of our round tour through the city of Fribourg. Starting from here, we follow the city’s own St. James way-posting. We reach the medieval “Red Tower” following the Rue St-Barthélémy and the Route François Arsent downwards. Here, we come to a part of the city wall, built in the 13th century. Somewhat at an angle is the Cat’s Tower (14th century). Descending the stairs beside the city wall, we come to the tower of the “Berntor”. The three towers are depicted in the coat of arms of the city of Fribourg. Some steps past the Berntor , we come to the inn “Zum Engel” that formerly accommodated pilgrims. This inn, protected by the archangel Raphael, stands in close vicinity of the “Bernbrücke”, the compulsory gateway for all pilgrims and travellers coming from the eastern side. In earlier times, the wealthy pilgrims chose 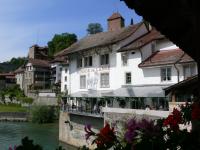 the inn “Drei Könige”. At the end of the Bernbrücke, we come to the “Jean-François-Reyffplatz”, and from there past the “Auberge de la Cicogne” with its ornamented facade to the “Place du Petit-Saint-Jean”. Here, on a pillar of the fountain dedicated to St. Ann (the protector of the tanners),stand four angels making music, and a St. James pilgrim. On we go, up the “Samaritergasse” (Samaritan lane). The Samaritan fountain depicts Jesus in conversation with a woman Samaritan who scoops water. Formerly, the St. James hospital stood at the Samaritan lane. It accommodated penniless pilgrims. Today, a sandstone relief of the patron saint is to be seen. The short “Passage des Augustins” on the right leads up to the Augustine church from the 13th century. After reaching the top, we follow the Grand-Rue, and then the little lane “Rue des Epouses” (street of the newly-weds) that brings us to 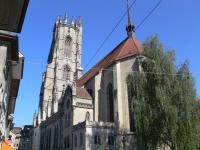 the St. Nicolas cathedral. The main portal (14th century) shows the Last Judgement. The figures on the walls of the portal were created in the 15th century. Also the interior of the cathedral is worth seeing. The altarpiece shows St. James with a scallop on his clothes. In all, there are half a dozen pictures of St. James in the cathedral. We leave the cathedral through the main portal. Straight on, beside the “Route de Morat”, we can see the Notre Dame church from the 12th century, with the Samson fountain, and behind it, the Franciscan church (“Eglise des Cordeliers”), with monastery. Both churches are frequently visited by pilgrims. From the cathedral, the route leads us to the left into the “Rue du Pont-Mure” to the town hall with the St. George fountain. Opposite the square “Nova Friburgo”, on the Rue de Lausanne, we come to the convent and church of the Ursuline nuns. Crossing the Georges-Python square, we arrive at the Rue de Romont that leads us to the railway station.