To the next section Payerne-Lucens (Var. B)

We follow this route to the end where we continue on a footpath beside the hill Champriond to the Chemin de Bel Air. Later, we turn off to the left to the Route de Villars and to the roundabout. Here, we cross the Route de Cormanon and go over to the stone cross at the edge of the wood, with the inscription “St-Jacques”.

Since 1470 (construction of a chapel), this site of Belle Croix has been an important transit place for St. James pilgrims.From the cross we follow the forest path to the right as far as the
bifurcation of the two St. James routes and follow the fork to the right (signpost direction Montagny-Payerne). After a short stretch, we reach the top of the wooded hill with the clearing and the resting place near the water reservoir. On the right-hand side, we walk down to the general store, where we continue on the right into the “Bois de Moncor”. 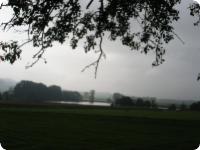 We continue due west, first on a field road, then on the main road past the farmsteads “Pra Fert” and “La Sonna” until Seedorf, consisting of a few farmsteads and the “Château de Seedorf”.The castle as it stands today was built in 1769. Now it houses a cantonal school for mentally handicapped children (boarding school). We remain on the main road leading us westwards past Seedorf to Noréaz with the modern parish church. The community’s coat of arms shows three St. James shells on a blue background.

The route passes through the village, past the “Auberge Fleur-de-Lys”, then leads to the right into the “Chemin de St-Jacques” which joins a field-path at the western end of the village. We follow the path westwards down to the hamlet “Moulin de Prez” in the wooded ravine of the river Arbogne. Here we turn off sharp right, follow the river in the wooded valley “Vallée de l’Arbogne” (with aqueduct, sources used by the Romans for Aventicum) and come in a northern direction past “Les Pelons” and the “Moulin des Arbognes” with the imposing saw mill, into the small village of Les Arbognes.

To the left we see the round tower of the castle ruin of “Montagny-les-Monts”, which we can reach over a small stone bridge and a mountain road. An iron stairway leads to the tower’s crown from where we enjoy a magnificent outlook over the wooded hills into the valley of the river Broye. Also the catholic church “Notre Dame de l’Immaculée Conception” is worth a visit. Its interior shows beautiful frescoes from the year 1646, and a Madonna with child, made of stone, from the time around 1500.

Back at the valley bottom, there is a bridge over the Arbogne. On the main road, we first follow the course of the river until we cross it near “La Planche” to reach the village of Cousset in a western direction. At the western end of the village, near the roundabout, we turn off to the right, cross the railway line and the Arbogne near Les Granges and soon after, we turn off to the right to the church “Notre Dame de Tours”.

The small church belonging to the small community of Les Granges dates from the 13th century and was refurbished several times. Its baroque main altar has a Madonna surrounded by rays, and two side altars. After visiting the church, we take to the paved path along the wood’s edge to the big crossroads at the eastern end of Corcelles-près-Payerne. The route leads on the road straight on, and after a short stretch, we turn off to the left. We continue due south past houses to the Arbogne which we cross in order to reach the railway line. We follow the line until shortly before the station of Corcelles Sud.

On the way to Corcelles

Here, we turn off to the left, cross the railway line and skirting the “Le Sansui” quarter partly on the road and partly on a path via the “Chemin de Sansui” to the main road “Route de la Fenettaz” leading to Payerne. We follow it, cross the “Route de Corcelles” and the railway tracks and come to the “Route de la Gross Pierre”. At the roundabout before the old town, we turn off to the left and come to the “Rue de la Gare” in an arc to the railway station of Payerne.

Our round tour starts at the station where we turn off to the right to the old town wall with the Barraud tower, built 1395. Through the old town, we come to the reformed parish church Notre Dame (13th/14th century). In front of the church stands the fountain with the standard-bearer figure from 1442. The three-nave church has a magnificent organ built by Melchior Grob, dated 1787. In the southern side-nave, we see a wall painting from the 16th century, showing the grave-shroud of Christ. In the northern side nave, we find the sepulchre of 1817 with the presumed mortal remains of the Burgundian queen Bertha. To the right beside the church stands the late-gothic court-house from 1571 with the outdoor stairs. To the right of the stairs, across a courtyard, one reaches the former
The three-nave pillared basilica was built in the 11th century at the suggestion of the abbot of Cluny. The long naves, the mighty pillars consisting of square stones of differing colour, and the huge barrel vault imbue the viewer with reverence. The church is a magnificent example of Cluny-period architecture. In 1536, the Vaud was conquered by the Bernese, and the reformed creed was introduced. The abbey was dissolved. Today, the church is a museum. To the left of the apse is a chapel from the 14th century, painted all around with depictions of angels. 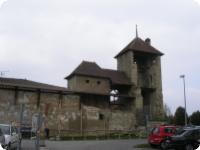 To the right of the apse is the “Grailly”-chapel from the 15th century, painted with a Pietà, a merciful Madonna, and depictions of various saints. In a niche of the wall on the left side, one can see a modern organ from 1999. At the other end is the narthex (vestibule) with frescoes from the 12th century, among them Christ as judge. A flight of stairs leads to the St. Michel chapel on the upper floor with a collection of old capitals. Behind the abbey church, we find the old fountain of the locksmiths (Fontaine des Serruriers) with a statue from 1533. At the street to the north stands the Croix Blanche, an old inn.

Now we turn southwards and come to the station where we again meet the Way of St. James.