Easy walking trial - (N.B. Those who want to spare themselves the 35 minutes’ walk through the busy roads of the suburbs can take the line 2 bus from the station square, and ride until Moncor, bus-stop Belle Croix. The stone crucifix stands 5 minutes’ walk south-east of the general store.)

To the next section Romont-Moudon

We follow this street for 200m and then turn off to the Route du Grand Pré. We follow this street to its end, where we continue on a footpath beside the hill Champriond as far as the Chemin de Bel Air, just to leave this later, turning left to take the Route de Villars on which we come to the roundabout. Here, we cross the Route de Cormanon and go to the stone crucifix at the edge of the wood, bearing the inscription St-Jacques.

Since 1470 (construction of a chapel), this Belle Croix site has been an important passage for St. James pilgrims. In the forest of Belle Croix, the two routes of the Way of St. James bifurcate; to the right to Payerne (signpost Montagny Payerne), and to the left to Romont (signpost Ecuvillens Romont). We take the fork to the left, leading in a south-western direction through the forest. At its edge, we come to the upper quarters of the suburb Villars-sur-Glâne. We descend the residential quarters on the slope offering a good outlook, skirt the church compound including the cemetery, and cross the railway line Fribourg - Romont. Along the road, we come to the path that leads down on the right-hand side to “Ste-Apolline” and to the water purification plant.

At the corner of the wood, we cross the river Glâne on an old stone bridge. At the end of the bridge is a wayside chapel, built 1566 with a picture showing the former bridge. The route leads in a south-western direction, crossing an access road, up into the wood (Bois-de-Monterban). At the southern exit of the wood, we either continue straight on, cross the main road Hauterive-Posieux and come directly to Posieux, or we turn off to the left and make a side-trip to the “Abbaye de Hauterive”. Going there, we pass the “Institut Agricole de Grangeneuve”. 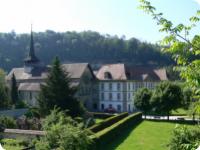 The Cistercian abbey was founded in the 12th century, and the church was built in 1150. Of special interest are: The tomb of the founder, the carved choir stalls, the glass paintings of the gothic choir window from the 14th - 15th century. The monastery building was built in the 18th century. After the abbey had been abolished since 1848, today’s monastery Hauterive was elevated again into the rank of abbey in 1973. After visiting the abbey, we return to the Institut Agricole. We pass it by towards the edge of the wood south of it, go along the wood and walk westwards over fields to Posieux. There, the Chapelle du Sacré Coeur is only a few metres above the road. At the exit of the village, we turn off left onto the road on which, crossing the motorway, we come to Ecuvillens. We traverse the village with its beautiful parish church, and at its end, turn off left to the path that leads us past the airfield. In a southern direction, along the edge, then through the wood, and across the field (Champ de la Croix), we come to Posat. 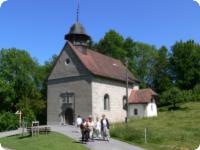 We follow the main road through the place. At its exit, we come to the inn La Croix d’Or, where, on the right-hand side, the path leads to the Chapelle de Posat. Below the chapel, we drink water from the fountain which according to oral tradition should be wholesome. After the chapel we descend westwards along the wood’s edge down to the river Glâne which we cross on a wooden suspension bridge, in order to come, on the opposite side, through the wood (Grands Champs) to the fields “Devant le Pas”. 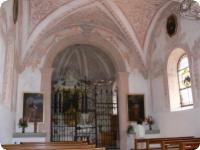 Here, the path turns westwards and across fields and meadows, past the hamlet of “La Crétausa” to the village of Autigny. On the southern side of the parish church, we traverse the place and continue, first westwards, then south-westwards. Past Gondran and along the wood’s edge, we descend to the river Glâne. We turn off right to the path leading along and then across the river on a bridge (Vers-le-Moulin). Over pastureland and through the wood, we come up to Chavannes-sous-Orsonnens. The baroque chapel from the 16th century with its beautiful murals is worth seeing. On the wall of the right-hand side, also St. James is depicted. We pass the church by as far as the road bifurcation at the village exit. Keeping to the right, and following the course of the rivulet “La Neirigue”, we come to the hamlets “La Fortune” and “Fuyens” and over the field (Courts Champs) to Planchevret, where the path turns off to the right. At a distance, we soon see the castle hill of Romont. 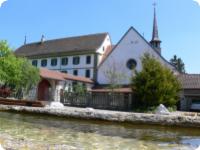 The route leads us further in a western direction across cultivated fields and meadows past the farmsteads of “Les Marais”, “Longeraie” and “La Foule”, until shortly after, it turns off towards the abbey “La Fille-Dieu”. The abbey was founded in the 13th century. Above the portal of the nunnery, the date 1635 is inscribed. The early-gothic arches of the choir with the dark stalls and the modern glass paintings give the convent church a mystic atmosphere. The nuns gladly give accommodation to pilgrims if they arrive in daytime. To the west of the convent, we reach the village-part Chavannes. From here, we climb in serpentines up the hill with the medieval town of Romont that invites us to a round tour. 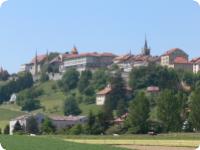 We start the round tour at the reformed chapel where we cast a glance down to the abbey La Fille-Dieu. Then we turn into the Rue de l’Eglise. Via the Place de St- Jacques, we come to the collegiate church Notre-Dame de l’Assomption. The house of God was built in 1451 on the foundation walls of a church burned down in 1434. The gothic glass paintings from the 14th-15th century, the stone pulpit from 1520 and the carved choir stalls from 1466 (depicting St. James) are noteworthy. After a few steps we reach the castle whose outward appearance today goes back to the 16th century. The inner court shows a big water-wheel (1772), and the interior houses a unique museum of glass painting. Opposite the castle stands the café-restaurant « La Croix Blanche – Au Suisse”, built in 1576. From the city wall with its towers, we see the Fribourg Alps far away.