To the next section Friboug-Romont 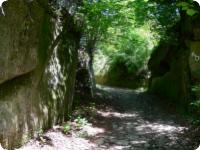 The name is derived from an oil mill in the “Sensegraben” (ravine of the river Sense). Here we can perhaps allow us a side-trip to the “Grasburg”. This Imperial Fort built in the 12th century, decayed and became a ruin in the 16th century. What is interesting is that there existed an escape route from the Grasburg into the Sensegraben. 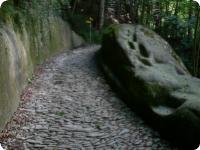 In earlier times, the medieval way, the so-called “Fryburgstrass”, led from “Torenöli” first along the river Sense, then across it. It was a steep path and the then uncontrolled river had to be forded by the draught animals that pulled heavy carts, while the pilgrims had to gain the other side on a rocking footbridge. The descent of 500m was a path hewn into the sandstone and paved with pebbles from the river. The traces of the edges of the wheel hubs, and of the steps are still visible today and are witnesses of earlier usage. Today, a well-marked path leads from “Torenöli” down into the popular nature preserve of the Sense with its riverside soil, and the ruin of the Grasburg in the background. Upriver, we come to the “Sodbach” bridge over the Sense, a covered wooden construction from the year 1867. 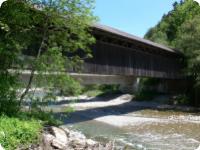 Beside the wood-bridge, a concrete bridge was built in 1979. Here we cross the cantonal border and after a short stretch, we turn off to a hollow road leading upwards. On the sandstone walls at the side of the path, inscriptions are visible. After the steep ascent we reach even ground and come to a wayside shrine dedicated to St. James. From here, a small road leads us to the village edge of Heitenried.
The St. Michel church stands on the right and is visible from far away. At the main road is the pilgrim’s hostel, newly built 2010 in the former cheese dairy.

We cross the main road near the bus stop not far from the pilgrim’s hostel and descend over meadows down to the “Lettiswilbach” (brook). Through a hollow way we descend to the hamlet of Winterlingen (Apollonia chapel). There we turn right to reach the western edge of the fir-tree forest. From here we proceed to the left westwards over fields past “Niedermonten” and “Cheer” until the first houses of St. Antoni. On a street in the residential quarter, and crossing the main road, we come to the catholic parish church St. Antonius. We refresh ourselves at the fountain there before we enter. In the interior, we see the old baptismal font (St John baptizes Jesus), a Brother Nicolas statue, a high altar of stone, and the baroque Antonius chapel from the 15th century, integrated in today’s church. 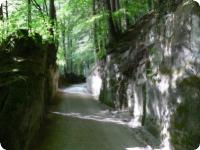 The route passes on the left side of the church and leads down along the edge of the wood. Through a hollow path we come by a crucifix of stone and to the hamlet of “Wyssebach”. Beside the Sebastian chapel, we cross the main road and walk over the field to the bridge over the brook “Taverna” which we cross. Walking beside the brook westwards, past a small resting place with Madonna statue, we come to “Rohrmoos”. Here, we turn off to the left to the road coming from Rohr (with the Holy Cross chapel) and joining the Fribourg main road. We use its sidewalk until Tafers where, on the left-hand side, we find the church and the two chapels. On the left is the St. James chapel, first documented in 1665. 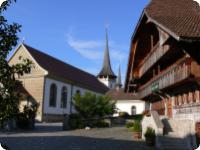 The new cobblestone pavement in front of the chapel is arranged in the form of a scallop. The facade on the portal side shows the legend of the gallows or hen’s miracle. The baroque altar shows the apostles John, James and Peter. Somewhat further on stands the bone house chapel from 1753 with a crucifixion group. The catholic parish church St. Martin, built 1786-89, stands opposite the two chapels. The choir and the polygonal spire date from the 16th century. The church square with its beautiful fountain shows a stately farmhouse, decorated with flowers. It was built in 1780 as a schoolhouse, then served as sexton’s house, and now is a museum of local history and culture. 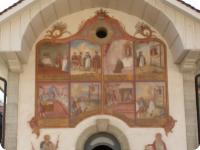 Chapel with Legend of the gallows

In front of the museum we turn right, cross the main road and walk northwards through a residential quarter, then turn off to the left and cross the Düdingerstreasse. On a field path, heading north-west, we come to the farmstead “Lamprat”. There, the path turns off into the wood “Lampratholz” and then leads over the open field to the hamlet of Menziswil, and further, past the Maria chapel to the bifurcation. To the right, on the paved road, we continue westwards past the domain “Hinter Bruch” (with the St. Jost chapel) and the little wood “Dälhölzli” to the castle of Uebewil.

Passing the portal of the private castle, also the stables and farmhouses, we come to the chapel Our Blessed Lady, which, unfortunately, is closed. We leave Uebewil and, passing an old, weather-beaten stone crucifix, we come to the outer quarters of the city of Fribourg. In the Bellevue quarter, we reach a very busy crossroads over which the traffic flows into the city. We use the new underpass to gain the other side. A steep incline leads to the chapel St. Bartholomew, built 1473. The chapel, surrounded by busy roads, is empty, abandoned and fenced off.