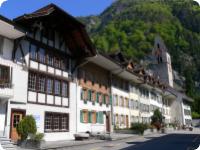 The route leads from the “Stedtliplatz” through the “Spielmatte”, past the general store (Stedtli) across the Helvetiastrasse and through the “Baumgarten” quarter to the weir of the old “Aarmühle” (mill). From here we go westwards along the right-hand riverbank of the Aare, passing below the bridge of the feeder road to the motorway until Weissenau on Lake Thun. 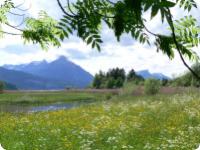 Turning right, we come soon past the historic ruin to the nature preserve Weissenau. In the Middle Ages, the boats of Lake Thun landed at shore here at the protected water castle. From the former imperial stronghold, the boat traffic on the lakes and the routes across the Alpine passes were supervised. From the tower, we have a fascinating outlook over the lake of Thun. Past the idyllic area of flat marshland, we walk along the shore to the landing pier of Neuhaus. Starting from 1678, an important transhipment place was here for traffic from and to the eastern Oberland. The historic inn is a popular excursion destination. A historic warehouse stands beside it.

We continue to the right across the “Lombach” (brook), past the camping ground and approach the “Manorfarm”. In the Middle-Ages, the historic half-timber house was a wine storage of the Augustine monastery of Interlaken. At the forest edge, even before we reach the Manorfarm buildings we turn off to the right and join the original Way of St James, leading behind the manor-house up to the rock gallery above Lake Thun. Then we descend again to the picnic and bathing site “Gelbenbrunnen”. After about 300 m on the sidewalk of the slightly ascending Seestrasse, we turn left and traverse a wood downwards to the bay of Sundlauenen, its aspect suggesting a more southern climate. 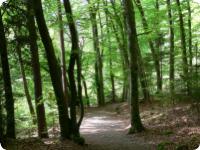 The pine-tree forest and the stony delta of the Sundbach are a popular excursion destination and invite to a rest. From the western part of the village, formerly the site of a vineyard of the monastery of Interlaken, we follow the lakeshore to the landing pier of Sundlauenen. Although the small landing stage is not always manned, the toilets, however, are always open. After a short ascent we reach the Thunerseestrasse which we cross. A small distance onward, we join the pilgrim’s path that soon continues as a stairway, leading upwards through rock ledges, partly secured by railings and stone walls. 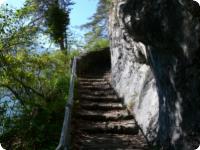 This exposed and formerly much-feared stretch hewn out of the rock was much improved by Oskar Luk in the war years, and for this reason is now known as “LUK-Treppe”. We climb up to a rise from where an easy path leads westwards to the Beatus caves and the ruins of a former pilgrim’s hostel (678 m.a.s.l.). Formerly, there also was a pilgrimage church higher up, with cloister and apartment for the priest. This was the parish church for the people of Beatenberg.

After the reformation, the pilgrimage church was closed. What remains today are vestiges of walls, and the small church bell. The burial place of Saint Beatus who is said to have lived in the cave, was visited by many pilgrims in the Middle Ages. It was a place of self-communion and prayer.Option: We follow the village lane down to the main road and turn away from it to the right and use the road leading up to the church.

Variant A: Via Spiez to Amsoldingen (14 km): By boat across the lake to Spiez, then walking via 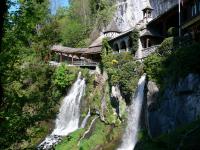 Einigen to Amsoldingen. In winter, this option is open at certain days and times only, depending on the boat timetable.
(Please note that in winter time there is a reduced number of boats crossing the lake)

Today, the Beatus caves are still a meeting place for many pilgrims. Many people come to see the extended stalactite caves, and not a few of them because they have heard about the life of the Saint and the Beatus legend or because they believe in the power of the place. A side trip up to the village of Beatenberg (1121 m.a.s.l.) is strongly recommended. 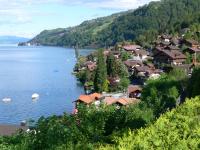 On a comfortable forest path near “Chrutbach”, skirting a quarry, we climb to the hillock of Balmholz. Above the quarry, we follow the path in a western direction through the Balmholz forest. On the newly covered bridge we cross the “Budelbach” (brook) and on the descending pilgrim’s path above Beatenbucht, we come to the “Nastelwald” (wood) where we cross the funicular to Beatenberg. We continue down to the “Salzacher-Wald”. We remain above the cantonal road and come to the first houses on the eastern side of Merligen. The beautiful village receives us with its well-tended front gardens and its southern ambiente. On the “Obere Dorfstrasse” that branches off in a sharp angle to the right shortly after the bridge, we come to the church of Merligen, well visible all around.

From Merligen, two possibilities offer themselves for the continuation of the pilgrimage:

Variant B: Via Thun to Amsoldingen (19 km): Continuing along the right-hand lakeshore via Gunten, Oberhofen and Hilterfingen to Thun, then via Scherzligen and Gwatt to Amsoldingen. This route is feasible also in the winter months, bar a few exceptions.