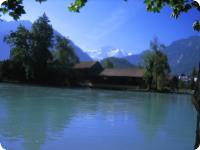 Along the Aare river

The Way of St James leads from the Beaurivage bridge along the shore path of the river Aare into the small town of Unterseen. Pilgrims wanting to visit the tourism resort of Interlaken cross the river on the Beaurivage bridge and, keeping to the left, reach the castle compound with the two churches and the former Augustine monastery of Interlaken. In the Middle Ages, the once-powerful monastery for monks and nuns, dating from the 12th century, had many possessions and during many centuries exerted a great influence on the whole region. In the 14th century, the sphere of control of the monastery extended from the Grimsel region across the region of the lakes of Brienz and Thun and as far as Bern. 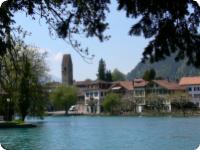 Also the historic town of Unterseen on the Aare river was founded on land that at that time belonged to the Augustine monastery. Over the centuries, many pilgrims used the monastery with the hostel as starting point for the place of pilgrimage “St. Batten”, today’s Beatus caves above Lake Thun. The former hermitage of Saint Beatus was an important source of income of the monastery in Interlaken. After many disturbances and conflicts in the time of the reformation, the monastery was closed in 1552 for good, and used as a hospital and storeroom. 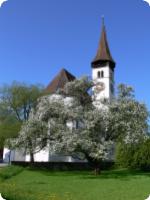 Later, some new buildings were added, and renovations were made (1741-51).
Today, there is the reformed castle church, built 1901-11, with the spire dating back to the former monastery church, and beside it, the catholic church.
From the castle compound, the route leads past hotels and the open field of the “Höhematte”, until it turns off to the right shortly before the Kursaal, to the river Aare. Using the Strandbad bridge, we join the Way of St James again.

Petronellenweg - a tip for pilgrims 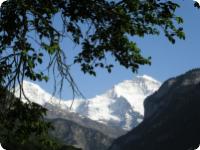 To pilgrims who want to get to know the unique Alpine world of the Bernese Oberland, we recommend travelling the Petronellenweg on foot, leading through the valley of the river Lütschine to Grindelwald. From there, but also from Interlaken, there are many possibilities of side trips into the mountains. For information, please apply to one of the railway stations Interlaken Ost or Interlaken West, or to the tourist office in the centre of Interlaken.