To the next section Amsoldingen-Rueggisberg The variant via Spiez is very popular with pilgrims. On arrival by boat we pass the restaurants “Welle” and “Pintli”, turn off from the Seestrasse to the right onto a stairway that brings us to the castle. On the left of the stairway lane there is a small rose garden, and on the right, the 1000 years old castle church invites to a visit. The three-aisle roman pillared basilica with elevated choir (ceiling frescoes) and crypt was erected around the year 1000 on the site of an earlier church built around 700. In the front garden we find a bell with the engraved year 1023 indicating the year when it was cast. The house “Roselier” stands opposite. It was built in 1743 as an inn, but is a private house today. 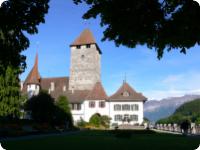 The castle houses a museum worth seeing, and the tower allows a good outlook onto the lake and the Bernese Alps. The Schlossstrasse begins beside the parking ground. We follow it past the “Gardener’s House” and come to the “Kirschgarten” quarter. The Way of St James turns off to the right and after a few houses leads past the natural monument “Italian chestnut tree” to the vineyards. At the winegrower’s hut, the winegrowing instruction path starts. Soon, we arrive at the “Katzenstein” (cat’s rock), a mystic-seeming erratic block from the ice age. The granite block comes from Innertkirchen and was carried here by the glacier. 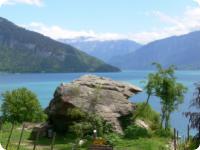 It first appeared on a document in the 14th century and is protected since 1960. We continue, climbing 70 steps to the edge of the wood above the vineyards, then westwards along the crest of the “Spiezberg” until the path descents slightly to a resting site with fireplace. Here, we leave the wood and walk along the “Weidliweg” westwards through the town quarter and down to the Thunstrasse near the bus stop (and restaurant) “Kreuz”. An underpass brings us safely across to Spiezmoos. After the railway underpass, we turn off to the Riederestrasse, which we leave soon after and turn off to the right onto the forest path which soon joins a broader forest road. After an ascent through the wood we come to the Riederestrasse and to the hamlet of Riedere. At the farmstead (fingerpost Kumm-Einigen), our route turns off to the right and leads us over meadows down to the railway underpass and further on to the Thunerstrasse. We follow this road (westwards) on the sidewalk, and after about 400 m we turn off to the right into the village of Einigen. From here, there are about 500 m to the church.

The church of Einigen dates back to the 10th/11th century and is one of the smaller of the 1000 years old churches around Lake Thun. For many visitors, this is a special place of spiritual power. We continue westwards and after a short stretch (at the fingerpost), we turn off to the right to reach the Strandbadstrasse. We follow it and turn off to the left shortly before “Kanderbrügg” (bridge over the river Kander). We cross the Thunerstrasse on a footbridge (near the bus stop Kanderbrügg), use the railway underpass and come into the Kander gorge. Following the fingerpost “Strättligsteg-Gwattegg”, we cross the gorge on a metal bridge. In earlier times, the Kander river joined the Aare north of Thun (near Uttigen). 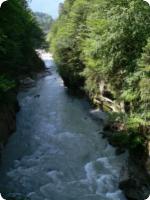 As the Kander caused many inundations there, it was deviated into the lake of Thun through an artificial gorge built in 1711-1714. After the bridge we climb the steep western slope up to the Gwatt-Wimmis road, cross it and come on a broad carriageway along the edge of the wood to the “Strättligturm” (tower). The structure with the ring wall was constructed as powder magazine in the year 1619. From the tower we go to the crest of the ridge from where the “Burgunderweg” above Gwatt takes us along the moraine ridge (“Strattlighügel”) to Gwattegg. The view over Lake Thun and the look back to the Bernese Alps is just unique. Along the crest, there are some banks under linden trees protected from the sun. A stairway with 44 steps leads down to Gwattegg. Here we learn that the Kings of Burgundy reigned here from 888 to 1033 and that in this period, the famous 1000-years-old churches around Lake Thun were built. 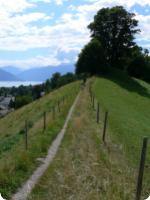 Our route joins the Way of St James coming from Thun and leading to Amsoldingen. We follow it on a carriageway down to the left over pastureland and through a small wood until, after crossing the motorway through an underpass, we come to “Alti Schlyffi” beside the “Glütschbach” (brook). We then climb up to the village of Zwieselberg, first following the road, then using a shortcut. We continue due west, at first on the Amsoldingerstrasse, then on a carriageway by the side of the wood and then through the wood until the pastureland to the east of Amsoldingen. 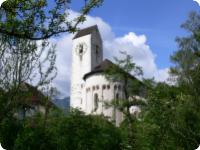 The route then leads across meadows and along the edge of the wood into the village quarter “Galgacher” and there turns left into the village Amsoldingen. On the village road, we come to the pillared basilica, visible from far away, and also belonging to the roman churches around Lake Thun dating from the time of the reign of the Burgundy kings. Below the choir is the crypt, and beside the organ we find a room with old capitals.