Easy hiking trail along the lake of Thun

To the next section Thoune-Amsoldingen (B) 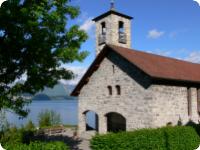 We enjoy the imposing view over the lake, into the valleys and to the Niesen mountain. We then follow a forest path westwards and above the cantonal road and come to the “Stampbachhaus”, a former corn mill standing at the exit of a small ravine, right beside the Seestrasse. 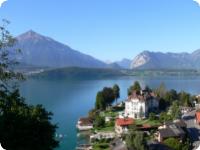 Here we follow the old stairway to the right up to a vineyard, where we turn off to the left onto the historic path above the “Seehalte” and leading to the road connecting Gunten with Sigriswil. On its sidewalk we descend to Gunten. A detour into the old part of the village with its beautiful church is worthwhile. Pilgrims wanting to avoid steep climbs and who can put up with heavy road traffic can use the safe and continuous sidewalk of the Seestrasse from Merligen or from the Stampbachhaus to Gunten. 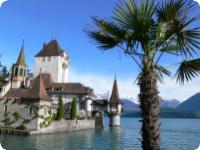 From the village centre we climb a while on the “Aeschlenstutz” road and then walk for about one hour on the “Alter Oberländerweg” westwards through nice residential quarters and a deciduous forest to the “Oertlibach” (brook) which we cross in order to turn off to the right and downwards. We remain on the “Oberländerweg” leading us to the first houses of Längenschachen above the Thunstrasse. Here, the route turns off right into the village, and above the vineyards, we come to the eastern entrance of the village of Oberhofen and further on to the “Riderbach” (brook). We cross it and turn left down to the Thunstrasse on which we come to the castle. The imposing castle plant with its exotic park has made known the place Oberhofen far and wide. The museum houses historic objects around the Beatus legend and St James. 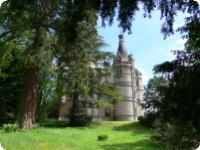 On account of the mild climate and the beautiful gardens, this lakeshore area is also dubbed “Riviera of Lake Thun”. Beside the historical “Heidenhaus”, formerly serving as wine cellar of the monastery of Interlaken, there are several other objects of interest. From the landing pier near the castle, we take a lane to the right up to the hotel Moy. There, turning left, we join the historic Oberländerweg and come to the church of Hilterfingen where we enjoy the outlook. 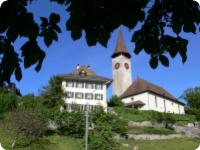 We keep to the path and come westwards to the imposing Hünegg castle with its museum for home décor and Art Nouveau. After the Hünegg park we walk for a short stretch on a historic path along lanes, then for some hundred metres along the main road as far as Hünibach. After crossing the Hünibach brook (“Hünibach is the name of both the place and the brook), we turn left and go down to the landing pier. Here is the start of the two kilometres long shorepath, leading at first along the lake, then along the river Aare into the town of Thun. Turning left and over the bridge near the Beaurivage hotel and over the gangway of the river lock we come to the railway station of Thun. 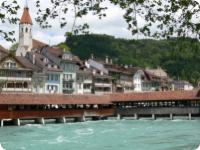 The old part of Thun has a medieval aspect, and we enter it near the hotel “Freienhof” (former inn and warehouse). In earlier times, this house offered to travellers accommodation, protection and “freedom” (“Freiheit”, hence Freienhof). The castle, built around 1190 by the duke Berchtold V of Zähringen, is the landmark of the town. The structure, several times enlarged in the course of the centuries, houses a museum in its tower, with exhibits from the regional history. The early-gothic hall of the knights is considered one of the most important medieval secular rooms of Switzerland. Also the town church is worth a visit. Its spire dates from the 14th century, and in the church is a Lord’s Table from the year 1602. In the course of a leisurely sightseeing stroll through the town we see many historic buildings, the town hall, the “Platz” schoolhouse, the “Bürgerhaus” and the “Kornhaus” (granary).