To the next section Maerstetten-Tobel James the Elder as one of the twelve apostles stands in this rotunda. He can easily be identified by the seven pilgrim’s staffs and bags adorned with shells that he holds ready for the pilgrims setting off. On the cathedral square, beside the pillar of St. Mary, stands a beautiful way-post indicating that the distance to Santiago is 2340 km, and that Märstetten can be reached on foot in approx. 4 hours. 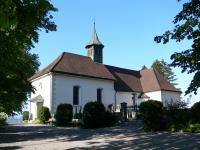 We traverse the old town in a southern direction. On the right-hand side is the church of St. Stephen, the oldest parish church of Constance. During the Council of 1414-18, the Papal law-court held its sessions here. In those days, it is here that the reformer Hus was condemned to death at the stake. We pass by his house before we leave the old town through the „Schnetztor“ gate (14th century). Further to the south, at the road bifurcation, we turn right and after a short stretch, we reach the Swiss border and neighbouring town of Kreuzlingen. Its former pilgrim’s hostel „Grödeli“, a beautiful half-timber house dating from 1610, still entertains guests today. 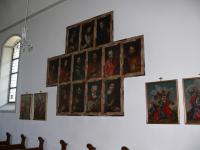 We continue straight on through the railway underpass, turn right and after a short way, we turn left to continue in a southern direction. The route leads through the quarter of Emmishofen, crosses the main road and later the railway track to the west of the station of Kreuzlingen-Bernrain and brings us along the « Saubach » brook through the wooded Saubach valley to Schlossbühl where we turn left. Crossing the forest, we arrive at the road bifurcation with the baroque Holy Cross chapel of Bernrain (built 1388). From the pilgrim’s chapel, we enjoy a magnificent view towards Constance and its lake. We cross the road and walk on the forest path, first towards the east, and shortly after, we turn to the left to take the quiet forest path, leading in a southern direction through two separate woods to the country road which we follow until a short stretch before the village of Schwaderloh. Here, we turn off, skirting Schwaderloh on its eastern side, we descend to the hamlet of Gäbelschhuuse. Now we keep to the right across open fields to the main road near the Fortibach ponds. We follow the road in a southern direction until Ellighausen where we leave it, turning west. 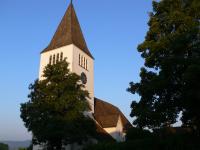 Over the fields of „Leewiese“, and continuing for a short way along the edge of the wood, we come to Lippoldswilen. From here, the route takes us in a southern direction to the edge of the wood, where the path turns off to the west. We traverse the wood on its right side, cross the brooks Laubbach and Chemebach, reach the Entemos farm, and continue to the south to the hamlet of Riet. An access roadway across meadows takes us in a south-western direction to the hamlet of Wald. We continue due south, and along the sloping meadows and the edge of the wood, we come to „Hinderen Rueberbomm“. Then along the edge of the wood, across the access road to Märstetten down to the plain of the river Thur. Past the farmsteads „Pilgerwäg“ and in a southern direction, we come to the second access road to Märstetten which we cross too and continuing straight on, we reach the Weinfelderstrasse. This road leads along the railway line to the station of Märstetten. Pilgrims who want to make a stop at an inn or at the pilgrim’s hostel in Märstetten reach the village via one of its access roads or via the Weinfelderstrasse parallel to the railway line. Also the church of St. James is worth a visit, with its frescos and the baptismal font, and its imposing spire has a sundial that can be seen from a long distance.