To the next section Rapperswil-Einsiedeln 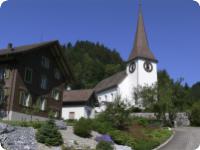 We turn off to the right and climb a grassy slope in a southern direction past the hamlet of Tanneregg up to Büel. From here, we take a small country road with scant traffic, leading gently downhill. Along slopes we descend southwards past Hueb, Dieterswil and Tänler to Blattenbach, thereby enjoying the view into the valley of the Jona and further to Lake Zürich. Among the houses of Blattenbach is the former inn “Zum roten Schwert”, built 1621. 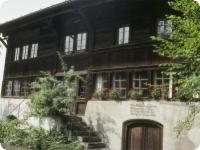 Below Blattenbach lies Wald, the chief town of the region and former textile industry centre, made accessible to industrial transport by the Töss valley railway. From Blattenbach, a field path leads in a southern direction across the meadows of Grund, and above Grundtal, it turns in a wide arc into a wood, crosses the brook there, and descends to the hamlet of Töbeli. From here, keeping to the right and between two woods, we come to the hamlet of Breitenmatt. On a field path southwards, we walk down into the forest, turn off to the “Pilgersteg” road and meet the railway line further down. We take a shortcut past buildings and come to the Walderstrasse. After having crossed the Jona brook, we leave this road, continue southwards, bypass Rüti-Fägiswil on its eastern side and come up to the hamlet of “Platten”. From here we continue southwards past “Grossacher-Wis”, through the wood “Föriholzwald” to the hamlet of Weier. 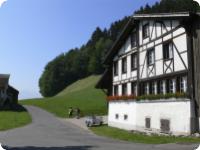 Here, we cross the road that leads to Rüti, turn off to the left and due west and past “Moosholz”, we come to the hamlet of Ober Moos. The route now leads over the railway level crossing and further-on in a south-western direction, past the hamlet “Unter Moos” into the wood where we cross the Jona and subsequently, the motorway. After the motorway, we go through the “Plattenwald”, past the clearing “Moosriet, and again across the Jona and to the forest clearing “Gruenau”. Then through the wood until we come to the brook-bank of the Jona, where we turn off to the left and cross the railway line. Along it, we come to the “Hanfländerstrasse” which we follow after turning right. We follow it in a western direction and turn off to the left onto the “Attenhoferstrasse”. On this road southwards across the railway line to the “Zürcherstrasse”, which we leave again at the next crossing, and through the narrow streets of the town of Rapperswil, we reach its lake-port of Rapperswil. 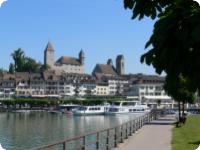 The town was founded around 1200 by the Lords of Rapperswil. The town hall was rebuilt around 1470. At the main square, there are also other, partly painted patrician houses. We climb past the hotel “Jakob” and using the double stairway, we come to the catholic parish church St. John, rebuilt 1883 after a fire. The two-storyed cemetery chapel, situated behind the church, is worth a visit. To the west is the castle, built in the 12th century . And adjacent to its western side, there is a well-maintained game preserve. The terrace offers a beautiful outlook over the lake of Zürich, the lake causeway, and the mountain Etzel. Stairs are leading past the capuchin monastery, built 1606, and past a rose garden down to the lake. After 300 m to the east, we come again to the town hall, and on its south, to the railway station. Rapperswil has a beautiful pilgrim’s hostel.