To the next section Fischingen-Steg This leads us southwards along the flanks of the hills and past the hamlet of “Stocke” to St.Margarethen. At first, the path leads along the eastern edge of the village, then in an arc to the main road. 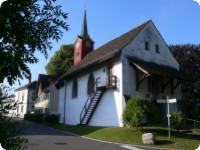 Shortly before we reach it, we pass the pleasant-looking chapel “St.Margaretha” (1641). What catchs the eye are its red spire and the wooden stairs at the outer wall leading to the gallery where formerly, pilgrims passed the night. Going northwards, we come to middle of the village, cross the main road and the “Chräbsbach” brook nearby, and in a westerly direction, we come to the rivulet Murg. We cross it and follow its course southwards until Münchwilen with the inn “Zum Engel”, a former pilgrim’s hostel. 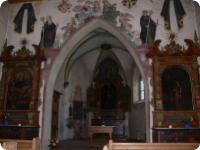 In the village centre, we cross the railway line Frauenfeld-Wil, and again follow the Murg until the village exit where we bypass the swimming pool, then cross the motorway. After the motorway, we again follow the Murg, first through the village of Sirnach, then to the railway line which we cross. After the railway line, we continue along the Murg to the ponds and to the bridge over which we come to the main road at the edge of the village Wiezikon. We follow the road southwards through its quarter “Gupfe” and the hamlet “Wis”, where we branch off to the left to Aawil. Here, we turn off to the right and in a southern direction, and away from the road, on access roads, on forest paths, across fields and small woods, we come to Oberwangen. The route skirts the “Martinsbärgli” and leads to the eastern side of Oberwangen. 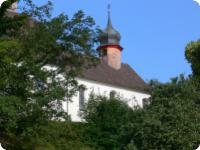 The baroque chapel of St. Martin sits on the hill crest. Its beautiful interior and altarpieces with scenes from the life of St. Martin, and the bench in front of the chapel, make the short climb worthwhile. Shortly after the Martinsbärgli, we turn off to the left into the wood and climb via the “Rutschhalde” up to the houses at the sloping wood clearing above Fischingen, from where we descend over fields to the main road of Fischingen. Following it, we come to the old inn and former pilgrim’s hostel “Zum Sternen”. We approach the imposing Benedictine monastery on a rise at the southern edge of the village. The monastery of St. John was rebuilt in 1410 after Zürich’s forces had destroyed it. The baroque buildings date from the 18th century, the heydays of the convent. 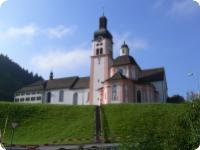 The baroque monastery church has a magnificent organ, and also houses the Idda chapel with the sepulchre of St. Idda, dated 1496. The altar has a foot-hole into which weary pilgrims could stick their aching feet, hoping for relief. St. Idda was pushed down a gorge by her irate husband, the count of Toggenburg. She survived and for a long time, she lived in a retreat, venerated by the people.