Easy hike with ascent and descent

To the next section Variante Loreto-Kapelle 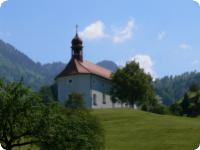 It is well-known that in the 19th century, this place was much appreciated by the people of the region who were then very poor. From Ridli, we go down to the main road and shortly afterwards turn to the right to the lakeshore. We follow the shore as far as Buochs. 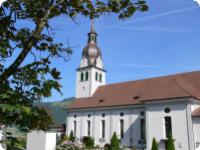 In terms of architectural history, and compared to neighbouring villages, this place is very young. Not many buildings are older than 200 years, the same as the parish church St.Martin which is worth seeing . However, this church is a successor to a chapel dating back to 1157. From here, we follow the St. James’ way westwards through the Obergass (lane), where soon, and not far from the motorway, we see to the left the Obergass chapel “Seven Pains of St. Mary”. The chapel from 1662 was built in the rural baroque style.
Crossing the motorway through an underpass, we turn to the right, and over meadows, we climb up to Ennerberg where we come to the Loreto chapel. The big picture over the portal, showing a scene from the Villmergen war (Swiss history), is worth seeing. 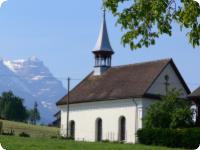 Also of interest is the picture of Virgin Mary, peculiar to Loreto chapels. Today’s Way of St.James leads from the Loreto chapel gently rising to the left to “Waltersberg” with its St.Anna chapel, also called “Chäppelisitz”. From here, the outlook to the valley basin of Stans is breathtaking. Now down via “Hostetten” to the river “Engelberger Aa”. We cross it and come in a western direction through “Oberdorf” to the St. Henry chapel. Over a field path, we reach the cantonal school “Fidelis” and the first houses of Stans. 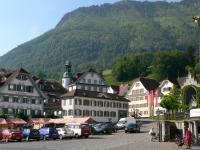 The historic cantonal capital hails back to the 10th century. Particularly worth seeing are the imposing parish church St. Peter and Paul from the 13th century, the “Unteres Beinhaus” (ossuary) close by, with a wall of skulls, and the Winkelried monument. From the Middle Ages, Stans was an important traffic junction along the old trade routes from Lake Lucerne to the alpine passes to Italy. In the early 18th century, a devastating fire destroyed big parts of the town. Nevertheless, numerous historical buildings could be preserved.