To the next section Variante Seelisberg As the saga of Tell’s Leap shows, the boat crossing was not without its dangers in earlier times. Already our boat puts into the safe port of Treib. Formerly, the port of Treib offered shelter to the seamen in distress in a violent Föhn storm. 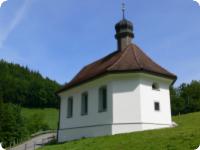 Not far from Treib, we take the funicular to its summit station Seelisberg, situated at 800 m.a.s.l. From here, we follow the radiated-shell way-posts “VARIANTE” and walk upwards to Oberdorf and, keeping to the right, to the bus stop “Geissweg” above the “Seeli” (small lake). Now we turn off to the right to “Ober Schwand” and then westwards through a wooded area to the hamlets “Meinig” and “Weidli”. Here, we join the “difficult variant” of the Way of St. James. For a short stretch until Emmetten, both variants share the same route. 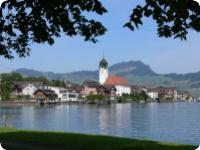 To avoid the steep descent to Beckenried, in Emmetten, about 150 m after the post office, we take the Ischenstrasse, and now again on the variant route, continue until the bifurcation shortly after the houses of “Ischenberg”. Here we turn off to the right and descend to “Ambeissler”. Now on a mountain path to the right through the mountain forest down to the centre of Beckenried, where we join again the official Way of St. James near the valley station of the cableway to “Klewenalp”.

From Treib, we go on a gently rising path up to Volligen. We are now on the “Waldstätterweg”, also called “Nidwaldnerweg”. In Volligen, we enjoy a splendid outlook to Brunnen, Schwyz and the “Mythen” peaks. At the side of the inn stands the St.Anna chapel. Following the Way of St. James way-posts, the route follows the direction of the hill-crest to Emmetten. At first due west along sloping meadows, crossing the Spreitenbach (brook) to “Triglis” (666 m.a.s.l.). From here, at first on a level path along the wooded slopes of the “Stützberg”, until the path gradually becomes steeper, bringing us through the wood, first to “Haselholzboden”, and then to the “Sunnwiler” route. To make travellers safe, the mountain path is equipped with a firm wooden fence, and along several short passages along rocks, with wire cable fences. 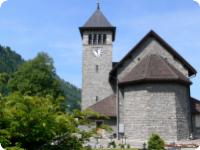 This steep uphill climb requires solid boots, and can be recommended only to experienced hikers not suffering from dizziness. After leaving the forest, we come past the “Weidli” to Sagendorf, a part of the village of Emmetten, and then to the centre of that village. The Holy Cross chapel has an altar picture showing the crucifixion, has also votive tablets and a death dance round. The parish church, dedicated to St. James and St. Theresa, has a beautiful wing altar and a pietà. The crest of Emmetten shows three St. James shells. Leaving the church of Emmette, we descend to Schöneck using the road and steeper shortcuts between bends. The pretty St.Anna chapel in Schöneck invites to a rest whereby we enjoy the stunning outlook over the Lake of Lucerne. 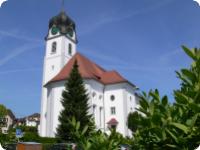 The steep path leads us through the forest down to the lake where we cross the noisy motorway. An opportunity to ponder over how it could be possible to curb the ever increasing mobility, the hectic style of life, and the noise. On a small, macadamised road, we reach Beckenried. Not to be overlooked is the parish church St. Henry, built in the 18th century by Niklaus Purtschert of Lucerne. In the vestibule lies the burial slab of a pilgrim to Jerusalem and to Santiago, saved from the former church. The interior of the church contains pictures of old-time pilgrims to Jerusalem and Santiago.