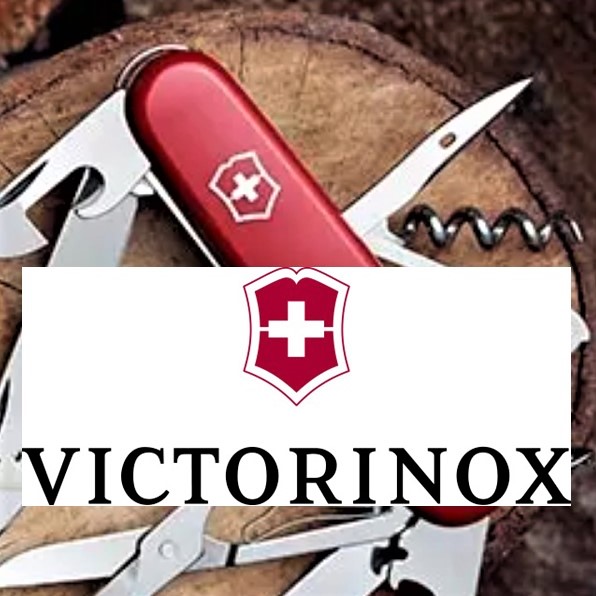 From here on a field road past a pond to the “Trachslauer Moos” (marshland) to the south, where we turn off to the left, pass the “Furenmoos” at its northern edge, and come to the Alpthal road at Trachslau, and to the brook “Alp”. We follow the Alp until shortly before the brook “Eigenbach” discharges into it. From here we follow the Alpthal road until the “Schnüerlismatt” bridge. Here we leave the road, cross the bridge to the left and follow the course of the Alp again. 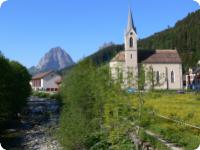 Changing to the other side of the rivulet, we pass the village Alpthal (with the parish church Apollonia) to the “Malosen” bridge (1018 m.a.s.l.). We cross both the bridge and the Alpthalstrasse and take to a mountain path leading to Haggenegg, 400 m higher. It is quite a demanding mountain path that should be used only by people with some experience with walking in the mountains, and with the proper equipment, specially mountaineering boots. The path leads into the “Malosentobel” (ravine) and further in a western direction through the “Langwald” (wood) and across the pastures of the alpine dairy farm “Bruust” (with the small chapel, built 1795), up to “Bogenfang” (1392m). Shortly before Bogenfang, the path turns to the right and we climb due south over mountain meadows to Haggenegg at 1414 m.a.s.l.

The mountain inn was mentioned in documents as pilgrim hostel already in 1483. Also Goethe (German dramatist and poet) was here twice (1775 and 1797). From Haggenegg 200 m to the west, stands a wooden, shingle-roofed church, a daughter chapel of Maria Einsiedeln. When Napoleon approached with his troops, the revered picture of Holy St. Mary of Einsiedeln was hidden in the ground here. A replica is in the chapel. On the terrace of the inn, we enjoy a unique panoramic view. From the summit of the pass, a steep mountain path leads down through the “Schuzenwald” to Stock (1246m). Then it winds through the steep wood down to the mountain road which we follow (except a shortcut near “Würzli”) through some wooded sectors and over mountain meadows down to the farmstead “Stoffels”. Here, the mountain path turns off to the right, taking us westwards across the “Büelbach” (brook) to “Büel” and to the Riedstrasse there. 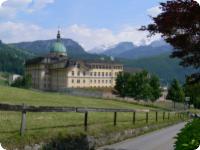 We follow that road through the village Ried (with its beautiful Fridolin chapel) and across the “Feldli”, past the “Kollegium Schwyz”, until, along the Herrenstrasse, we arrive at the town centre of Schwyz.
Worth seeing in this cantonal capital are the parish church St.Martin with its baroque altars and the luxurious pulpit, the organ ornamented with gold, the ceiling paintings, the St. Michel chapel behind the church, built 1612-18 with a pieta in the winged altar-piece, the town-hall built 1642-45 on the southern side of the market square with its superbly painted facade (battle of Morgarten), and the archive tower nearby, housing a museum with the Federal Charter among the exhibits. 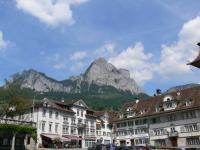 chapel, built 1683 and dedicated to Mater Dolorosa, Our Lady of Sorrows, and the “Franzen” chapel, as far as Ibach (bus stop Post). Further southwards we come across the bridge over the Muota (river) with the small “Erlen” chapel. Shortly afterwards, after the crossroads, we follow the field path that leads in a southern direction over open grassland (crossing the Ingenbohl road)to Unterschönenbuch. Now we turn off to the right to the main road, and westwards, and crossing the motorway, we reach the convent of the Sisters of Ingenbohl, enthroned on a hill, with church and Theresianum. Skirting the convent on its southern side, we reach the eastern edge of the village of Brunnen.
The catholic parish church St.Leonhard is well visible. It was built in 1656-61, with baroque altars and crucifixion group. Through residential quarters in the eastern part of the small town of Brunnen, we reach its 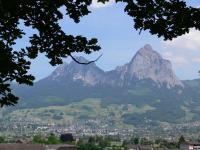 centre with the stately patrician houses and inns. After a visit to the “Bundeskapelle” or “Dorfkapelle” with the statue of Charlemagne, we come to the shore of Lake Lucerne. On the terrace of the “Waldstätterhof”, we wait for the ferryboat to take us across the lake. We let our eyes wander over the mountain peaks, the “Fronalpstock” to the left, the “Uri-Rotstock” above the southern end of the lake, and to Seelisberg. Already in the Middle Ages, the pilgrims had to cross the lake here. Very likely they had to wait much longer for their crossing, as for us, our liner already approaches the landing pier.