To the next section Kaiserstuhl-Bruenig

Today, many people appreciate Ranft as a place of peace and meditation. Especially the idyllic surroundings of the upper and lower Ranft chapels by the Melchaa brook have their unique atmosphere. From Flüeli-Ranft to Sachseln, pilgrims can use either the marked Way of St. James, or the “Way of Visions”.

At Flüeli, the route turns off to the left and leads down in a south-western direction – past the southern foot of the hill on which stands the Karl Borromäus chapel and which is visible from afar – into a forest. From there, always in a south-western direction downwards, across fields and through woods, past “Gross Leh” and “Endi” until Steinen which is part of the village of Sachseln, and down to the parish church of Sachseln.

We can take the “Visionenweg”, the Way of Visions, from Flüeli-Ranft to Sachseln through a wonderfully scenic landscape. Away from busy roads, we can enjoy the sculptures on the theme of visions, and a magnificent outlook on the lake of Sarnen. The Way of Visions leads from the house of birth of Holy Brother Nicolas through a beech wood containing six vision stations on the themes “Vision in the Womb”, “Tower Vision of the 16-Years-Old”, “The Decision of the Young Man”, “He Himself was the Tabernacle”, “The Father, Mary and The Son Thank Him”, and “Easter Time Experience of Mrs. Dorothee”. The artist André Bucher created six noteworthy wayside shrines on these topics. The way takes us then down to the parish church of Sachseln. 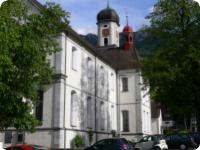 The catholic parish church St.Theodul was built between 1672 and 1684. A painting in the vestibule depicts how Brother Nicolas gives advice to politicians and thus prevents a civil war. The tomb of Brother Nicolas, canonized in 1947, has been in the main altar since 1672. The name of Sachseln derives from the diminutive form of the late-roman word “saxum”, meaning rock or stone. The upper part of the village therefore is called “Steinen” (from “Stein”, meaning “stone”). Apart from other sights, Sachseln has something very special: In the celebration altar of the parish and pilgrim church are the bones of Brother Nicolas. 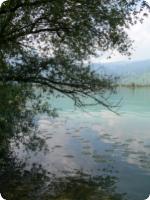 In the burial chapel near the old church spire, we find his first tomb. In the museum beneath the church is a vast exposition on the life of the saint. Near the parish church of Sachseln, the marked Way of St. James, coming from Flüeli, turns off to the left and leads past the baroque Joseph chapel to Edisried to join the Brünig road shortly after, before Buoholz. We follow the road in a south-western direction to Ewil where we turn sharply right to the lakeshore hiking path. We keep to this path towards south-west as far as the historic country inn Zollhaus (or “Zollhus”).
Alternative: An unmarked alternative route of the Way of St. James leads through the village of Sachseln down to Lake Sarnen and along the lake to the inn Zollhaus.
The route, on the last stretch skirting the railway line, turns away from it to the right and leads past the swampy “Hanenriet”, then turns left to lead over “Diechtersmatt” to the railway station of Giswil. The village is a typical scattered settlement without historic village centre. 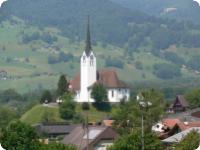 The community is first mentioned in a document of the year 840. On account of its strategically favourable situation, it once had three fortified castles. Starting from the station, we use the sidewalk of the Brünig road. At the next roundabout, we go to the left and stand in front of the hotel “Krone”. To the left we see the ruin “Rudenz”. The parish church St.Laurentius (17th century) stands on the castle hill, the site of the former castle “Hunwil”, built using building blocks of the former castle. The ossuary chapel St.Michel, dating from the middle of the 17th century, stands beside the church. Being pilgrims, we turn away from the “Krone” to the right and then take the little road that leads straight on across the Aa (river) to Buechholz. 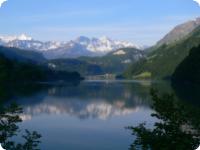 We continue in a moderate climb through the wood and cross the main road beneath its viaduct. We keep to this side and after a few bends of the path in the wood, we reach the unguarded level crossing of the railway line. We cross it and over pastureland, we reach Kaiserstuhl, the door to the valley terrace of the Lake of Lungern.