To the next section Bruenig-Brienz

The chapel was enlarged in 1830 and again consecrated to the Mother of God, to Antonius and Wendelin. The walk along the quiet lakeshore landscape to the southern end of the lake before Obsee is particularly pleasant. This village is characterised by many beautiful farmhouses that harmoniously blend with the landscape.

A shady resting place offering an outlook over the lake is perfect for pilgrims. After that, we continue on the Obseestrasse to the chapel St.Beatus. This chapel was built in 1567 during the disturbances of the reformation as a welcome alternative place of pilgrimage to that of the Beatus Caves above Lake Thun. It contains pictures of scenes from the Beatus legend.
From ancient times, people have used a western and an eastern route from Obwalden to the Brünig. The more frequented route leads from west of the parish church of Lungern via the “Chäppelistiege” to “Letzi” and further via “Sagers Chäppäli” and “Sewli” to Brünig. The other one uses the mule track, the “Chäppälistrasse” which is more to the east and somewhat less steep, to the “Burgkapelle” (castle chapel), and from there in parts along the railway line and over mountain meadows up to “Sagers Chäppäli” and onwards to the Brünig pass. 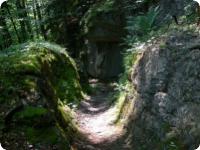 We choose the former, which is marked on the map and on the way-post as Jakobsweg, and known as “Alter Brünigweg” , beginning at the south-eastern edge of the village of Obsee. We are facing a climb of 386 m of difference in altitude. Near a big woodworking factory, the path turns off to the right and up into the in part thin forest “Sattelwald”. Crossing a field road, the path leads through the forest up to the Brünig road. In the “Sattelwald”, first traces of the ancient Roman track can be discerned. At several places, we can clearly see old stair steps hewn into the rock, flagged paths and ruts cut out by wagons in the time of the Romans. It is said that local people have also discovered Celtic objects in this forest. 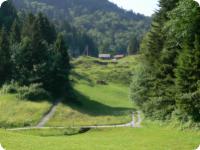 After crossing the Brünig road the path turns off to the left into a specially rugged woodland. Below the rocks of the “Balmiflue” and past erratic blocks, the route leads up to “Letzi”, a natural rock defile at the Brünig road which formerly served with its barrage wall as defence line of the people of Obwalden against the reformed Bernese. After a short stretch along the Brünig road, we turn left and the well-marked path leads first through the wood, and then over mountain meadows and along the edge of a wood, past “Sagers Chäppäli” to the “Sewli”. There, we come to the railway track of the “Zentralbahn”. Along the railway line, we then climb up to the summit of the pass. In one of the inns, we allow ourselves a rest and enjoy the beautiful panoramic view to the snow-capped peaks of the Bernese Oberland.