To the next section Werthenstein-Willisau

For pilgrims starting in Brunnen: By boat from Brunnen to Lucerne takes about 2 hours. A train ride is 45 minutes.

n the Bahnhofstrasse westwards along the river Reuss, we pass the “Kapellbrücke” (chapel bridge) with the water tower, the landmark of Lucerne. Built around 1300 as part of the town fortification, it is Europe’s oldest surviving wood-bridge. The pictures below the roof were painted in 1614. Many of them were destroyed by fire some years ago. Some distance downriver, the Rathaussteg (town hall footbridge) turns off to the right into the old city with its painted guild-houses. Above the old city is the 870m long Musegg wall with its imposing towers, erected as town wall around 1400. 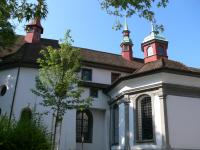 The sumptuously decorated nave is also worth a visit. In the vestibule near the left-hand side entrance, a powerful and elegant group of figures in stucco can be seen. It represents the small Jacob as a child, with his brother John (the Evangelist). The well-marked Way of St James turns now off in a south-western direction and leads along the Klosterstrasse past the buildings of the cantonal administration, and past the railway tunnel to the Bruchmattstrasse. We follow this street, pass the vocational school and turn off, at first to the left to the Berglistrasse, and afterwards to the right onto the Gigeliweg which leads to the southern rim of the Gigeli wood. We follow the wood but a short way and take a south-western direction through residential quarters of Dattenberg. The route passes the “Chupferhammer-Feld” down to the “Luzerner Hauptstrasse” in Kriens. We follow it some 300m and turn off to the left to follow the Fenkernstrasse. Now we head for Obernau, past the town centre of Kriens with its parish church. 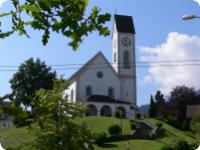 Taking to the left and proceeding in a south-western direction on footpaths and town quarter streets (past the town-part “Hackerain”) to the hamlet of Geissrüti. Now along the slopes of the “Schlossberg”, below the wood to the village quarter “Brunnhöf” at the southern rim of Obernau. The bus line from Lucerne ends here. Pilgrims wishing to avoid walking through the city of Lucerne can ride the bus and start the pilgrimage stage from here. We start (or continue) westwards, and a hiking trail takes us along the edge of the wood. Behind the hamlet of Rodel, the path joins the Obernaustrasse, on which we go back a short stretch in the direction we came, then we turn off left into the Schachenwald wood. Through the wood, we follow the course of the brook Ränggbach northwards to the clearing Steibruchhof. Still along the Ränggbach, we come to the footbridge of the hiking trail. We cross the brook and climb the steep wooded bank of the “Ränggbachgraben” (trench). The path, secured by railings and wooden planks takes us past rock walls, waterfalls and small resting places. Solid footwear is recommended. 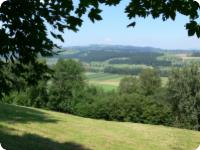 Above the Ränggloch gorge, the path continues through the wood, turns westwards and leads down to the even valley bottom. During the descent over sloping meadows, we pass by the “Charehus” where we turn to the right, cross the Luzernerstrasse and join a field road leading us past the farmstead “Unter Säntimatt” to a small canal in the plain. Here, we turn off to the left and, skirting the village of Blatten on its eastern side, we come to the baroque St. Jost chapel. Now across the field in a northern direction, crossing the railway line, we come to the river Kleine Emme, and further to the west, to the bridge “Blatterbrugg”. Following the path of the southern shore westwards, we come to Werthenstein. 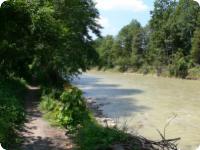 Along the Emme river

After the violent tempests of the year 2006 when big parts of the riverbanks were torn away, restoration works are now in progress. Bar a few exceptions, the shore-path leads mostly over meadows or through small woods near the river. It passes on their northern side the villages of Malters (with the St. Martin church), Ennigen and Schachen (where it crosses the Rümlig brook), crosses several roads and also the railway line near the “Schofgrabe”. Shortly before Werthenstein, the river valley becomes narrower. After a bend, we can see, above a rock ledge, the monastery “Our Blessed Lady” to which we are now directing our steps. 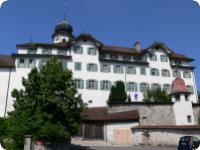 The monastery was founded following a wondrous light phenomenon around 1500, and as a regional place of pilgrimage had its heyday in the 17th and 18th centuries. Its spring-water is known for its healing power far around. We leave the interesting monastery church and descend on the access road down to the Kleine Emme. On the way we come by the “Gnadenbrünneli”, a shrine in a grotto to our right. We cross the river on a wood-bridge and, heading north-west, come to the railway station.