To the next section Guemligen-Rueggisberg

The route leads to the access road to Rothöchi, crosses it and follows the edge of the wood. After 200m, it turns off to the left into the Pleerwald (wood) and comes to a crossing where 7 roads and paths converge. A small resting place is also there. From here, we head southwards down to the Underbergetal. 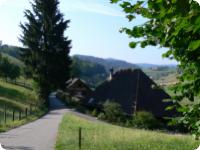 Past the farm “Gansere”, we come to the Oberburg road. We follow it a short stretch, then turn off to the right. Across a field, we come to the farmstead Mattenhof. Here, we follow at first the Zimmerberg road, and after only a short distance, we turn off to the left to a field road leading along the slope of a hill to the hamlet of Schuepisse. Here, we turn off to the right and on the hiking trail, we climb in a western direction up to Althus and from there on the access road to Zimmerberg higher up. During the ascent, we meet the pilgrim symbol “to let be”. We remain on the crest of the hill and proceed south-westwards across pastureland and along the edge of the wood to the Eybergwald (wood). We traverse it above the steep wooded slopes of the Chrouchtal (valley) until, near the hamlet of Bonziloch, we descend into the valley. At the northern rim of the Chrüzflue (rock-wall), we come to the first houses and the main road of Krauchthal. 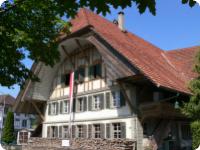 We cross the village on the main road southwards, paying the reformed church (built 1794)a brief visit. At the village exit, we turn off to the left onto the winding road that leads past the penal institution Thorberg to the hamlet of Schwändi 170m higher. The Thorberg, sitting on top of the hill, today is a prison. It goes back to pre-reformation times when it was founded as a monastery dedicated to Saint Pauline. With a view of the prison, we think of the people behind bars and ask ourselves what being imprisoned means to them.From Schwändi , the ridge-way rises continually and turns into a south-western direction and leads through the Äbnitwald to the farm Tannebode. 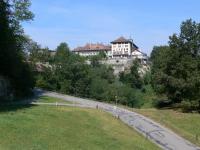 Now along the edge of the wood southwards past the farm Sunnrain and through the Utzigewull wood. From the southern end of the wood over open pastureland along the Allmit ridge to the hamlet of Hubel. We enjoy here the wonderful view over the city of Bern until the Bernese High Alps. At Hubel, the relatively steep descent begins down to Utzigen. At the castle of Utzigen, built 1669 (with park and café open to the public), we can take a rest. There is also a bus stop there. In the village centre near the crossroads, there stands, as it did already in former pilgrimage times, the inn “Zum durstigen Bruder” (thirsty brother). Past the castle (now a boarding and nursing home), the route takes us over meadows and fields to the farm “Weier” (with the pilgrim symbol “to be silent”), where it turns right, and to the wood’s edge. Along the sloping wood, we come down to Boll in the Linden valley. 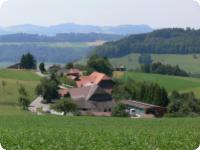 We traverse Boll on the main road in a southern direction (with a brief side trip to the station) and at the western end of the village, we turn off to the left onto a village lane. Along the brook of the Lindental which we cross twice, and in a south-western direction across the brook Worble, we come to the farmstead Wiler. Now southwards through the wooded slopes up to the village of Dentenberg. Here, a cosy inn awaits us. We follow the access road as far as the western village entry, take the shortcut over the meadow and return to the access road near the cheese dairy. We follow it south-westwards across pastureland to the Dentenberg forest. Still on the same road and, shortcutting a bend, we come to the wood’s edge near the war memorial on the southern side of the Gümligenberg (hill above Gümligen).From the World-War memorial, we take a foot-path westwards along the edge of the wood to the first houses of Gümligen. We turn off southwards and through a residential quarter, we reach a crossroads with the village fountain and the reformed church of 1953. The pilgrim figure on the outer wall is impressive. After a visit to the church, the route takes us in an arc past the portal of the castle of Gümligen, built 1735.