To the next section Rueggisberg-Schwarzenburg 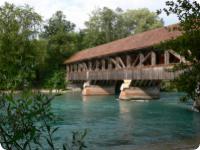 At the edge of the Hüenliwald (wood), we turn off to the right onto a forest road that takes us in a south-western direction through the wood, crossing the main road, and to the motorway which we cross too. After the motorway, we pass the park of a castle compound on its right-hand side, and, forming a wide bend, we come through Halen, a part of the town of Muri, and come down to the river Aare which we cross on the Auguet bridge. 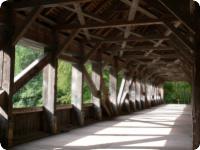 The covered wooden bridge from 1835 was only transplanted to this site in 1973 when the motorway was built. Walking along the wooded shore-strip, we come in a north-western direction to the Giessehof. Shortly after, the path turns off to the left and comes to the bridge across the Gürbe river, north of the airfield of Belp. We cross the bridge in order to come over the plain of Belp to “Under-Selhofe” a part of the town of Belp. From here southwards through the town-part Ober-Selhofe past the schoolhouse and the modern church of the ecumenical centre to Kehrsatz. 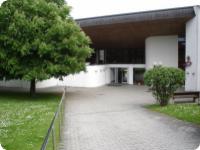 We visit the ecumenical centre with the church room and the Room of Silence, being used by both creeds, reformed and catholic. By the way: the pilgrim coffee here is delicious. To the south-east of Kehrsatz and in a park is the country estate Lohn, built 1780-83. It serves the Confederation for representative purposes on occasion of state visits. On certain days of the year, the estate is open to the public (for dates, please consult the Internet). In the centre of Kehrsatz stands the Blumenhof, built 1580-90 and extended to a baroque country house 1745-52. Since 1990, the Blumehof has been the seat of the municipal administration. From the town centre, we proceed southwards to the line of the railway through the Gürbetal and we cross it on the northern side of the station. Further to the south, we cross the main road Bern – Wabern – Wattenwil. At first, we proceed in a southern direction and follow the ascending road that leads to Englisberg, then we turn off to the left to a shortcutting quarter lane that joins the Englisberg road again higher up. We use the road for a short stretch only and turn off to the right onto a hiking trail on which we come, first through the wood and then over a sloping meadow and crossing the trench of a brook, up to the old-age home Kühlewil. 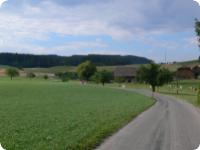 Past the home the route takes us southwards across meadows to the hamlet of Kühlewil and further into the wood “Chüliwil” which we cross on a forest road southwards. Thereby we cross two access roads and leave the wood not far from the farm Allmid. On a field road and still southwards, at first along the edge of the wood and then over open pastureland, we come down to the hamlet of Obermuhlern. Here, our path describes an arc to the left and going over the hill, we come to the road Kehrsatz – Riggisberg on which we proceed to Niedermuhlern. We keep to the road and traverse the village past the cheese dairy and the bus stop until the village-part Holzmatt. The field road takes us from here southwards past the farms Riederweid and Unders Ratteholz to the rim of the wood Ratteholz. Here, we turn off to the left onto the forest road that takes us in an arc up to the field road near the farmstead Buechweid. From here we have a gorgeous view to the hills of the Emmental, the Gürbe valley, the Bernese pre-Alps and four-thousanders, and the Gantrisch chain. 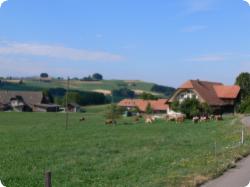 On the road, we amble southwards to the hamlet of Gschneit where an inn awaits us. Here, the path crosses the road to Oberbütschel and, keeping to the left, takes us to Leueberg. At the parking space Leueberg (bus stop), we climb up to the memorial and the lookout point. Under a group of trees giving shade, near the Tavel memorial, there is a resting place with panorama tables. Below us, the wide, green plain of the Gürbetal is spread out. In the background are the mighty, glacier-covered mountain massifs of the Bernese Oberland. 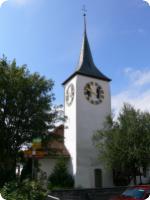 We leave the memorial of the Bernese dialect writer Rudolf von Tavel, 1866 – 1934 and continue southwards on field and forest roads through the pine forest. Shortly before the southern exit of the wood, the route turns to the west, and across pastureland, we reach the hamlet of Mättiwil where we join the Way of St. James coming from the Bernese Oberland and leading to Fribourg and Romont. On the field road heading westwards, we reach our stage goal Rüeggisberg with its beautiful church and the impressive monastery ruin.