To the next section Burgdorf-Guemligen 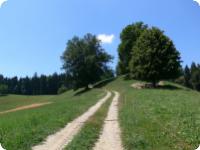 At the wood’s edge, we come to a stone ritual. We cross the completely wooded range of hills and, heading southwards, come to a clearing and to the edge of the “Chaltenegg” wood. We follow the edge of the wood in a southern direction (above the hamlet of Oberi Rotmatt), and after a small wood and over open pastureland, we come to the hamlet of Chaltenegg. Turning off to the right, we go up the incline to reach a rise. On a field road southwards, along the sloping meadows and past the hamlet of Chnubel, we descend to Dürrenroth. 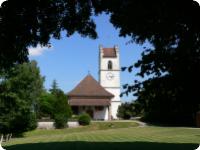 After crossing the main road, we come to the railway station. At the village square with the two beautifully renovated inns, there is also the St. Mary church in a park-like compound. It was reconstructed in 1768, giving it a hall structure in late-baroque style. Passing the park, we come to the street that takes us westwards to the hamlet of Gärbihof. After a few nice old houses, the path branches off to the left into the Rotwald (wood). At the wood’s edge, we come to the pilgrim station “Life in the Region of Trachselwald”. We traverse the northern part of the wood in a south-western direction and come to the access road that brings us to the hamlet of Unter Waltrige. On the way, we meet the pilgrim symbol “to hear”. We follow the field road southwards and, along the slope of the hill, we come into the wood above Häusernmoos. 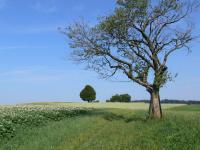 At the road bifurcation in the wood, we turn off sharply right to Häusernmoos, cross the Rotbach (brook) and the railway line and come to the crossroads where we turn off towards the left to Herbrig. On the wall of a barn, we find the next pilgrim symbol “to pray”. In Herbrig (its name possibly derived from Herberge) begins the ascent to the lookout point Lueg. The continuously ascending route leads over roads and footpaths, over pastureland, through small woods and also through a wooded ravine up to the mountain meadows below the Luegwald (wood). During the ascent, we cross a few access roads and also pass the hamlets of Juch and Junkholz. 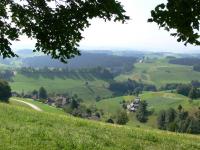 The last metres are gained on a steep field road to the vantage point (887m). Beside the military monument, we also find a resting place with barbecue. The panorama is overwhelming, from the Jura chain to the ranges of hills of the Emmental region, and from the Bernese Alps to the Gantrisch chain and to the Fribourg Alps. The hamlet of Heiligenland below the Lueg is idyllically lying on the hillside. Below the vantage point, the route leads over the summit of the pass and past the country inn “Lueg” (838m, with bus stop) and, from the road, turns off to the left. We walk westwards down over mountain meadows and after a wood, we again come to the Lueg road. We leave it shortly after and turn off left to a small access road that leads us via pastureland past the hamlet of Heimismatt to the farm “Gärstler”. Here, the road turns northwards and presently, on a forest road that turns off to the left, we come back to the Lueg road and to Kaltacker. 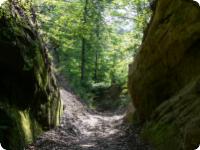 The staff of the stately inn “Zum Hirschen” waits here on hungry pilgrims. At the road bifurcation soon after the last houses, we leave the road turning off to the left to the access road to Egg that climbs up in a south-western direction past the schoolhouse and along the edge of the wood to the hill Egg. From Egg we proceed along the wooded crest of the hill, passing the hamlet of Sandgruebe on its southern side, to the edge of the wood. Through the wood and along the edge of the wood, we come to “Waldecke” from where the route leads down the steep slopes of the “Lauehölzli-Wald” into the valley of the river Emme. Thereby we pass through a gorge-like hollow way conveying a mystic sense, by name of “Leuenhohle”. On the high sandstone walls, there are traces of engraved names and symbols. In the nearby country inn “Summerhus”, a fortifying meal awaits us. We leave the inn and proceeding along the wood’s edge, we come to the former “Siechenhaus” (hospital for incurables) with the St. Bartholomew chapel (closed), both from the second half of the 15th century. 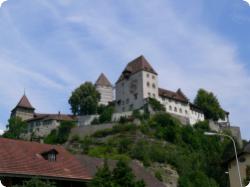 Already we can see the houses and towers of Burgdorf. Using the road, we come to the river Emme at the foot of the “Gisnauflüe” (rock-wall). We cross the Emme on the covered wooden Wynigen bridge. Due south-west, we come to the reformed parish church (built 1471-90). The note-worthy house of God has a rood screen from 1512, and choir stalls from 1647. The rood screen, artfully hewn by stone-masons, forms the separating wall between choir and nave, and is considered the most beautiful in Switzerland. On the Burgberg rise to the south-east of the church stands the well-fortified Zähringen castle from the late 12th century. Apart from municipal offices, it also houses a museum. The Way of St. James leads us through picturesque lanes of the old part of the town, between church and castle. We see the fountain with the Justitia, citizens’ houses, guild houses and pergolas, as well as the town hall, built in 1750. Leaving the old part of the town, we come to the Lower town from where we continue on our way in a south-western direction.