To the next section Eggerstanden-Urnäsch

In 1986, the Liebfrauen church was officially recognized as basilica. The chapel of Grace with its statue of St. Mary, carved in 1460, was renovated in 2006. Below the Liebfrauenberg, the roman church St. Peter has been standing since the 12th century. We follow the yellow-white marking, and thus our pilgrimage takes us on the paved municipal road past the railway station of Rankweil to the edge of the town. Through an underpass below the motorway, we come to the town-part Brederis, and after about 45 minutes, we reach the St. Ann chapel. 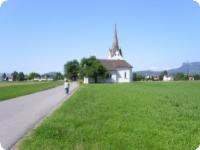 From there, we proceed on a field road until we come to the road, cross it with due precaution, continue through the Rhine plain past the dredger-excavated lakes of Paspels to Meiningen-Zollamt. The church St. Agathe in Meiningen was built in 1609. We cross the national border (near Oberriet), the Rhine and the motorway. Then, the Way of St. James turns off to the left and leads past the ruin of Blatten. Near “Güetli” (423m), the traffic-free little road leads away from the railway line in an arc to the right, skirting the Blattenberg, and after a further 45 minutes, we reach the hamlet of Hirschensprung.
A short distance before the Hirschensprung, we come to a small chapel. 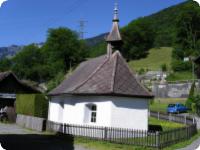 There, we turn right, and on a busy road (with due care) we go up an incline at first, through the rock defile of the Hirschensprung and then further in the direction of Freienbach. Partly on pilgrim’s footpaths, partly on the road, and past the hamlet of Rehag, we reach the former place of pilgrimage Freienbach (616m) with the modern church The Visitation of Mary. At first, we follow the mountain road towards Chienberg until we come to a right-hand curve (647m) where we turn off to the mountain path marked in red-and-white on the way-post and leading straight ahead along the Freienbach (brook) in the direction of Eggerstanden. 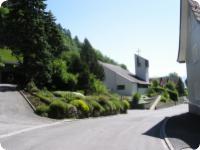 After a steep climb through the mountain forest, we reach the alpine dairy farm “Oberrieter Strüssler” (800m). From there, we continue over pastures and through small woods to Wogalp (880m) and further up to Neuenalp (959m), where we pass the border between the cantons of St. Gallen and Appenzell Innerrhoden.
On a comfortable, partly paved forest road, we come to the pilgrimage chapel Maria Hilf zum Bildstein (approx.: figure stone shrine Mary We Implore Your Help) (1016m). From there, the route leads in a moderate descent down to Eggerstanden (892m). The modern church at Eggerstanden replaced a chapel built in the 18th century. The names of the two inns, Neues Bild, Altes Bild, recall a former centuries-old wayside shrine.