Easy walking trail partly along the lake of Geneva

To the next section Céligny-Genève 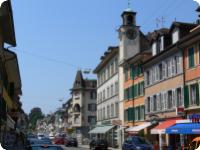 Past the castle Perroy, built in the 16th and 17th century), we come to the church Ste-Marie (built 1481 and reconstructed 1828). From here down to Rolle we use the sidewalk of the access road. In Rolle, we leave the cantonal road and on the well-kept shore promenade, we come to the castle of Rolle. The castle with the four mighty round towers was built in 1264-69 by Peter the Second of Savoy. In 1536, the Bernese burned it down, and in 1558, it was rebuilt. At the end of the Bernese rule, it was bought by the town of Rolle. It served as prison, law-court, archives and registrar’s office. Even today, it still is the seat of the district administration. In the south-eastern tower is a library with 13’000 volumes.

We follow the shore promenade and come to the catholic church without spire. The glass paintings in the neo-gothic church were painted in 1929 by Alexander Cingria. Just a few metres from the shore is the island “Isle de la Harpe” with the monument in honour of the emigrant (and tutor of Alexander the First of Russia) Frédéric-César de la Harpe (1754-1838). He was a sympathiser of the French Revolution and one of the co-founders of the new canton of Vaud.
At the end of the shore-path (near the port), we cross the cantonal road and to the right, we follow the Route de Gilly. It leads us through outer quarters along a small wood to the roundabout where we turn off to the left to reach the railway line. We use the underpass and near the farmstead Pierruet (with pond), we turn off in a south-western direction. 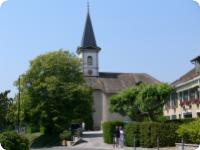 The small road leads us past the farmstead La Dolle into a wooded ravine with brook (Flon de Vincy). We cross the ravine and in an arc we come down again to the railway line which we follow as far as the underpass of the closed station of Bursinel. Here we turn off southwards, cross the road and the railway line, and on the access road, we pass the castle and the vineyards and come to the village of Bursinel. The towers of the castle date back to medieval times, the dwellings to the 18th century.
In the cosy wine-cellars of the village, the vine-growers offer us their noble wine for tasting. We traverse the village on the main road and past the church of Bursinel and through a residential quarter, reach Dully.

The castle of Dully was built in the 15th century and was altered in 1884. Shortly before the park gate of the castle, our path turns to the right and after a short stretch in a south-western direction, leads into the wooded ravine where, going southwards, we cross the two brooks La Dullive and then Le Lavasson. Then, still in the wood, we follow the bubbling Lavasson south-westwards and, above La Lignière and the vineyards, we come to the houses and the underpass near the station of Gland. We cross the railway line, follow it a short while, and keeping to the right, we come to the industrial quarter and the antitank obstacles at the end of the village. After the crossroads, we cross the rivulet Promenthouse on the road and come to the houses of Pont-Farbel and to the road intersection. Here, we turn off eastwards, walk along the edge of the wood, and come back to the railway line which we cross. A field road parallel to the railway line brings us past the airfield to the first houses of Prangins.

After a short stretch, we leave the railway line and, keeping to the left, we come to the reformed church St-Pancrace. Behind vast fruit and vegetable gardens, we perceive the imposing castle of Prangins, built 1730, today housing a national museum of Switzerland. Interesting exhibitions give the visitors an idea of the development of Switzerland in the 18th and 19th centuries from agrarian country to urban industrial state. From the castle terrace, we have a good outlook down to Lake Geneva.

We leave the castle of Prangins in a south-western direction through a park-like area, turn off to the railway line on the right, and along the railway line across the rivulet Asse, we come to the station of Nyon.
Note: The Old Town, the lake promenade and the landing pier can also be reached from Prangins directly on the sidewalk of the cantonal road.
Nyon has a very interesting history. Already the Celts settled here in Noviodunum. After the subjugation of the Helvetians, Julius Cesar founded the first Roman town on (today’s) Swiss soil): Colonia Julia Equestris, in the year 45 before Christ.

After the fall of the Roman Empire and the ravages of war of the migration of peoples (Burgundians), the town fell into decay in the 5th century. In the Middle Ages, Nyon began to flourish again under the rule of the nobles of Prangins (11th and 12th century). In 1293, the region came under Savoy rule, and from 1536, the Bernese bailiff reigned.
A brief round tour through the town is therefore appropriate. From the station to the old town is only a matter of minutes. The “white” castle was built in the 13th century by Louis the First of Savoy. Today it houses a museum for porcelain and local history. From the terrace of the castle, we throw a glance down to the lower town and the lake. To the right of the castle, we come to the Roman Forum with the statue of Cesar.

Below is the Roman museum. In an arc to the right, the lane leads to the reformed church Notre Dame (12th to 14th century). In the choir, paintings from the time around 1300 can be seen. Through the Porte Ste-Marie, we come to the three Roman pillars. Below is the port for yachts, further to the left are the Tour de César, the medieval town fortifications and the fountain Maître-Jacques. The amphitheatre, discovered in 1996 is presently being excavated.
The next stretch of road leads us past the station of Nyon and along the railway line to the Rue du Lac on which we cross the railway tracks. Then we turn off to the left to take a town quarter street, cross the trench of the brook Le Boiron on a footpath and climb up the opposite slope. Past the hamlet of Bois Bougy, we come to the rim of the wood Bois Bougy, from where a comfortable hiking path takes us, first along the edge of the wood, then in a southern direction through it.

After leaving the wood behind, we are rewarded with a beautiful view over Lake Geneva. Continuing southwards, we come to the edge of a vineyard, where we turn off to the railway line on the left and follow the line south-westwards to the station of Crans-près-Céligny. Here we climb up on the right-hand side past the vineyard and the castle park and, describing an arc, come into the village of Crans (Cranos in Latin). Its coat of arms shows four pilgrim scallops. Heading left, we come to the church, built around 1500.

The terrace in front of the church offers a beautiful lookout with banks inviting us to stay a while and rest. Not far from the church we join the access road that takes us across fields to Céligny. In its centre, we find the small church with the somewhat special belfry in the upper part of the facade. Each of the two bells cast in 1858 weighs 500 kg. The interior (key available at the parish house) surprises us with a beautiful organ. Beside the church is the castle, built 1722.