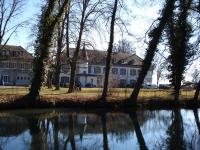 The castle, built 1722, has been owned since 1946 by the ecumenical council of the churches and is meeting place and ecumenical college. We skirt the private property on its left side and come to the former gardener’s house. Here we join the tree-hemmed path which takes us through fields and past vineyards, twice changing direction, down in a southern direction to Founex. The vine-growers’ village Founex was first mentioned in 1224 as “Fosnay”. It was settled already in early times and came under Roman rule. In the 9th century, it came into the possession of the abbey of St-Maurice, together with Commugny. In 1257, the place was sold to Peter of Savoy, and in 1271, both villages were united with Coppet. 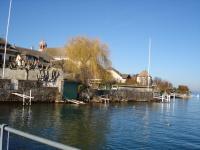 We traverse Founex and at the road bifurcation after the village exit (near La Sapinière), we take the right-hand fork that takes us in a south-western direction through residential areas (with vineyards and fields) to the church and the cemetery of Commugny (Communiacum in Latin). The precursor church St-Christophe was built in the 6th century on the site of a former Roman villa. The present church and the parish house were erected in the 18th century. The route leads now eastwards above the rivulet Le Grenier until shortly before the park of the castle of Coppet. After crossing the rivulet, the path turns southwards. On the access road, past the castle park, we reach the small town of Coppet with the castle built in 1767. It has a museum (“housing conditions in the 18th century”). The Grand Rue shows a row of balcony houses, built in the 16th century. 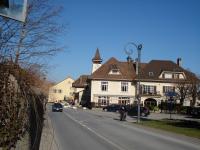 The reformed parish church, built around 1500 as a Dominican monastery, has choir stalls from the 16th century. It can be visited upon request only. Coppet was settled already in the Bronze Age, and later was taken over by the Romans as “Copetum”.  (Note: If we want to make a detour around Coppet, we do not turn off in Commugny towards the left to the church, but remain on the road and turn off to a south-western direction shortly after. Along the vineyards, we come to the bridge of the rivulet Le Grenier, cross it in order to come to Tannay going straight on through residential quarters.) 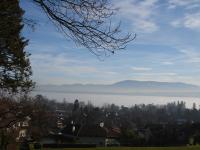 From here we follow the comfortable path along the railway line, pass Les Tuileries, cross the road and the access road to the motorway, and shortly before the station of Chambésy, we turn off to the right. Slightly ascending, we come up to the village exit of Chambésy where a view worth seeing awaits us. A panorama table shows us the names of all the mountains we see (in good weather): From the Moléson (Fribourg) to the Mont Blanc (France).

We walk on the road past the houses of Les Ormeaux into the place Pregny where we pass the small catholic church. From here, we can see the towers of the Château de Tourney where Voltaire lived from 1758 to 1760. After a short visit of the place we descend in a south-eastern direction past the vast park grounds of the Château de Penthes (today museum of the Foundation of the Swiss living abroad) and crossing the railway line, down to the Rue du Lac. 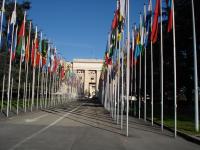 We follow the lake road, passing below the UNO building (Palais des Nations) and past the botanical gardens until we come to the city section Sécheron (not far from the monument of Mahatma Gandhi) where, through the park, we come to the lake promenade. On the way we see a broken wooden chair (“chaise amputee”), a huge, house-high sculpture of the Swiss artist Daniel Berset, sponsored by the organisation Handicap International. On the shore promenade, past the port facilities of Geneva, and also the bathing beach, we come to the mouth of the Rhone (near the Rousseau isle). We follow the shore road of the Rhone for only about 100m, and turn off to the right. The route takes us first northwards up to the station (Place de Cornavin) where we rest a while.

From the station, we go south-westwards past the catholic Eglise de Notre Dame as far as the Rhone isle where we cross the river Rhone. On the isle (L’Ile), there is a bank building with an integrated tower of the former bishop’s residence from the 13th century. From the Place Bel-Air, we climb the Rue de la Cité and via the Grande Rue we come to the precincts of the cathedral St-Pierre. On the way we come by the Maison de Saussure , which is the city hall (Hôtel de Ville), and also the former arsenal from the 16th century. Past the Maison Tavel, we come to the St-Pierre cathedral. 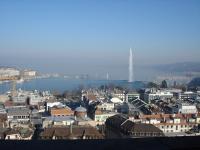 The construction of the today reformed cathedral was started around 1150 in the Roman style on the foundations of a previous church, and was completed towards 1230 in a gothic style. To the right of the entrance, the high-gothic Maccabee chapel was added in 1406. The classicistic entrance portal with the 6 pillars was built in 1752. It reminds us of the Roman temple that once stood here. In the interior of the church is the sepulchre of the Duke of Rohan (around 1600 leader of the French protestants), and carved choir stalls from the 15th century. Two magnificent glass rosettes let in the light. A visit to the chapel is worthwhile. The northern tower can be climbed on 150 steps, and offers a beautiful view to the lake, the city and the Alps. In the south tower, below the sentry room, the big bell from 1407 still strikes the hour. In the basement, one can view some old capitals of previous churches.

Geneva was captured by the Romans in the year 120 before Christ. It was christianized in the 4th century, and came under the rule of the kings of Burgundy. After that, the bishops reigned until they were chased away by Calvin. In 1402, Geneva was assaulted by the Savoyards, and became temporarily French in 1798. In 1815, it became part of the Swiss Confederation.