To the next section Variante Umgehung Allaman We follow this street leading along the railway grounds, come to the overpass which we cross and arrive at the Avenue de Provence and on it to the part of town “Malley”. Some 200m after the Métro station “Provence”, we turn off southwards onto the path on which we walk through the Vallée de la Jeunesse, past the part of town “Montoie” and the wooded cemetery to the big road roundabout “Vidy”. There, we take an underpass to the St. Lazarus Chapel of Maladière, built 1460.

From here, we follow the Way of St. James way-posts, cross the motorway through an underpass and, turning off to the right, come to the Route de Vidy. This street leads along park grounds (field of Roman ruins with museum) and skirts a big camping ground. By the way: the name Lausanne stems from the gallo-roman “Lousonna”. A side trip to the field of ruins and the Roman museum is in any case worthwhile. To the west of the camping ground, the well-marked route takes us to the Plage de Vidy (beach equipment and beach café).
N.B.: The seat of the International Olympic Committee has been in Lausanne-Vidy since 1915, and since 1986 in the glass palast there.

Optional route: An optional route leads from Lausanne Ouchy along the lakeshore to the part of town Vidy. 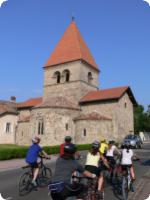 Along the paved shore-path, we come to the mouth of the Chamberonne (brook). We cross it and, first on an unpaved path, and then on a well-tended shore promenade (with modern sculptures) through the outskirts to the landing pier of St-Sulpice. To the right stands the former Cluniac priory with the massive rectangular tower from the 11th century. In the interior, remainders of wall paintings from the 14th century are preserved. Behind the church, a path leads us back to the lake. In a small wood, we make a detour to avoid the mouth of the Venoge river, and come on a well-kept shore-path through a fashionable residential district into the small town of Morges, founded in the 13th century by the counts of Savoy. In the bright interior of the reformed parish church (built 1769) is a glass painting portrait of the reformer Zwingli. The castle (built 1286) can be reached either on the beautiful shore promenade, or by detours through the old town with the old fountains, the 16th century town hall, and other remarkable buildings. The castle served the Bernese bailiff starting from 1536, and today is the military museum of the canton of Vaud.

After a brief rest in the small town of Morges, we head for the next goal which is Allaman. We take the shore-path leading past the castle, making a detour to avoid the mouth of the river Morges. Before the mouth of the rivulet Le Boiron, the path turns to the right, crosses the cantonal road and leads to the railway station of Tolochenaz-gare. First to the left, and then to the right along the railway line, we walk through the vineyards until, shortly before St-Prex, we turn off towards the lake. We cross the railway line and the cantonal road and on the lake-road, we come to the former castle. It sits on a promontory (Pointe du Suchet) of St-Prex, a small town founded in 1234. 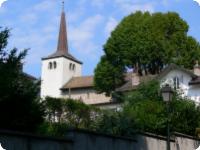 By the lake, there still stands a dwelling of the former castle, wreathed with ivy. From the town-fountain, a picturesque lane leads to the old town gate (built 1234) with its belfry and a church clock from the 18th century. The reformed church of St-Mary stands above the old town. The present construction was built in the 12th century on the foundations of a predecessor church from the 4th century.
We leave St-Prex through the town gate and walk westwards through a residential quarter. At first, the road leads along the lakeshore, then turns right and through meadows and past vineyards, comes to the winegrowers’ village of Buchillon. At the cemetery by the village church, the route turns off to the right and leads presently in a western direction through the wood (Grands Bois) and along the edge of the wood down to the river Aubonne, after passing a garden restaurant and crossing a street. 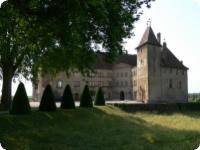 We cross the Aubonne on a bridge and follow its course through a wood and past the winegrowers’ hamlet of La Fresaire until we come down to the mouth of the river Grève. Northwards, we see the winegrowers’ village and castle of Allaman, built in the 15th century. Somewhat more to the west stands the reformed church St-Jean from the 14th century, and before it, the medieval Maison Rochefort (wine-growing estate of the city of Lausanne). After the mouth of the Grève, we cross the wood, and then the vineyard La Pêcherie (with restaurant) to the access road to Allaman.

Note: Pilgrims wanting to visit Allaman and perhaps to overnight there, take this access road, and from Allaman back to the Way of St. James.