To the next section Lausanne-Allaman 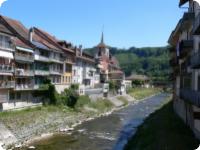 From the station southwards across the Broye and after that on an old stone bridge over the rivulet La Carrouge. We follow it a short stretch until the footbridge to the right that takes us across it and to the cantonal road.
The field road immediately branches off to the left, returns to the main road and then changes direction several times until leading through a wood (Bois de Bioley) up to the widely scattered village of Vucherens.

There is a small chapel there, built in 1523. From the water reservoir and the mobile phone transmitter mast, we enjoy a striking outlook not only to the Moléson mountain in the Fribourg Alps, but also to the mountains of the canton of Vaud (Rochers de Naye, Tours d’AÏ, Tours de Mayen, Dent de Morcles). By good weather, also the French mountain chain south of the lake of Geneva can be seen.
From Vucherens, a field road leads over the crest of the lengthy hill (Champ du Bochet). After about 2 km, above the Bressonne (brook), we descend through a small wood down to the road. We cross the road and the brook, pass the houses of Ecorche Boeuf and come to the crossroads. At first, we follow the road southwards, and after about 200m, we turn off to southwest onto an unpaved road which leads us into the wood “Bois de la Côte”. We cross the wood southwards on a forest road, and after about 20 minutes, we come to a crossroads where 5 small roads converge.

Here, we turn off to the right onto a small path that takes us a steep incline down to the Bressonne. We cross it and climb steeply up to the chapel La-Cure. This neat chapel was built in the ravine by monks in 1438. In 1758, it was rebuilt at the present site. The parish house served formerly as pilgrim’s hostel. We take a small paved road and soon come to the village of Montpreveyres by the main road to Lausanne, and formerly belonging to the bishopric of Lausanne. The place name is derived from the old French term “Mont des Prêtres”.

At the village exit, we follow the main road until, after the Hotel des Balances, we can turn off to the left into the wood (Bois du Grand Jorat) where we cross the Bressonne again. In this dense forest, the pilgrim’s hostel Ste-Catherine formerly offered protection and accommodation. After a short climb, we follow the course of the Bressonne through the northern part of the forest until we come to the crossroads, still in the forest. Here, we go first to the right until, at the clearing, we can turn off to the left into a small wood and come to the houses and the inn at Pra Roman. We continue along the edge of the wood in a south-western direction to the road that leads to Chalet-à-Gobet.

We follow the road southwards and after about 300m, we turn off into the wood Bois de Peccau which we cross in a western direction. We arrive at the bus stop at the eastern edge of Epalinges (Bus Nr 5 every 10 min on weekdays, every 20 min on Sundays to the station of Lausanne and Métro M2 down to Ouchy on the lake). We pass a residential area southwards to the edge of the wood Bois de la Chapelle and continue along it to the cemetery. Here, we turn off to the right and on the village quarter street, we come to the crossroads at Les Planches.
We continue in a north-western direction through residential quarters of Les Croisettes, somewhat above the terminus station of the Métro, and across the Moudon road, we come to the wooded ravine of the rivulet Flon. We follow the course of the water, cross the rivulet several times and on a well-tended forest path, we come to the Vivarium (below the motorway bridge).

From here, we take a forest path up to the Lac de Sauvabelin (and restaurant). We climb the 35m high wooden lookout tower and enjoy a splendid outlook to the lake, the city, the Alps and the Jura. Only a few minutes away is the lookout point Le Signal with its small chapel (and bus stop). After a short descent on a comfortable path along the side of the wood, we come to the old town, to the Palais de Rumine, and further on to the cathedral of Lausanne. 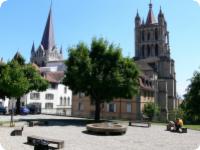 We begin the city sightseeing tour through Lausanne, the capital of the canton of Vaud, at the Château Ste-Marie, the bishop’s seat, built around 1400, north of the cathedral. The residency building was used from 1536 by the bailiffs of the Bernese ruling power, until Napoleon ended this rule in 1798. Today, the castle houses the cantonal administration. Past the Old Academy (16th century), we come to the now reformed cathedral Notre Dame. Its preceding buildings can be traced back to the 6th century. The gothic church construction was completed in 1275. Above the western portal, adorned with statues, is the striking spire, offering us a good view over the city, the lake and the Alps. The triple-nave construction with transept has beautiful glass paintings in windows and rosettes. The south rosette was built in 1240. 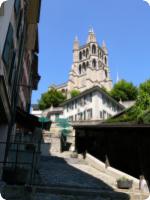 The carved choir stalls (13th century) is the oldest in Switzerland. On the southern side of the cathedral square is the former residence of the bishop from the 11th century, today housing the historical museum. We descend the Escalier du Marché and come to the Place de la Palude with the city hall (Hôtel de Ville). Past the Fontaine de la Justice in a south-eastern direction, we come to the Place St-François with the reformed church St-François that belonged to a monastery. Its choir stalls date from the 14th century. Near the lake in the city quarter Ouchy, there still stands a tower of the bishop’s residence from the 12th century. It was integrated in a hotel in the year 1890