To the next section Moudon-Lausanne

The church was built in 1451 on the foundation walls of a former church burned down in 1434. The gothic glass paintings from the 14th and 15th century, the stone pulpit from 1520 and the carved choir stalls of 1466 (with St. James) are worth seeing. 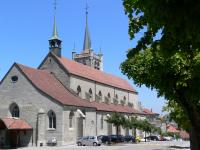 Only a few steps away, we reach the castle, the outer appearance of which dates from the 16th century. In the inner court is a big water-wheel (1772), and the castle’s interior houses a unique museum of glass painting. Opposite the castle, the Café-Restaurant La Croix Blanche – Au Suisse is waiting for us. From the town wall with its towers, we see the Fribourg Alps far away.
We leave Romont heading for the next destination Curtilles which we want to reach via Billens and Lovatens. We follow the Rue du Château and leave Romont near the Tour à Boyer. At the foot of the hill, the Way of St. James follows the main road (Route d’Aruffens) for about 10 minutes. We walk through residential quarters, cross the railway line and come to the roundabout near the electric power station. Here, we turn off to the right and cross the railway line again. Right after the railway line, the route leads in a north-western direction between two factories to the edge of the wood with the resting place and wayside shrine “Vierge des Pauvres”. From here, we take a field path up to Billens with its inn and the parish church St-Maurice beside the crossroads (200m to the right).

To the left, we take the little-used road as far as the hamlet of Hennens, where we visit the chapel St-Bernard, built in 1653. After the chapel, the route takes us first along the road, then on a field path over the crest of the hill (Champ Liamon 809m) with its transmitting mast. First we climb up to the wayside cross and the resting place with the stone banks. We enjoy the beautiful outlook to Romont and the Alps. The ridge-way then follows the cantonal border Fribourg / Vaud. In the valley of La Broye is Lucens with the prominent castle, and in the background, we see the heights of the Jura. From the transmitting mast, we follow the Way of St-James fingerposts and, taking to the right, and on the field road used by the farmers, we come down to Lovatens (in Latin: Lovatingis).

A man we met told us that a stone had been found here with the inscription “Deae Minervae”, pointing to the possibility that a roman route passed here. We head for Curtilles on a field road paved with concrete, pass the schoolhouse, walk down to the cemetery and from there along the wood’s edge on the Route de Romont which leads to Curtilles and through this place as far as the crossroads where we turn off to the left to the field road to Prévondens. Curtilles was founded in the 11th century by the bishop of Lausanne.

Note: A visit to the reformed parish church Notre Dame in Curtilles with its frescoes and glass paintings is worth your while (the key is available at the house beside it).

The field road to Prévondens takes us through asparagus fields and meadows in a great arc past the farmstead Pré Cerjat to the Broye river. On the shore-path bordered with high birch trees, we walk southwards past the shady resting place near the fishpond (Etang de l’Isle à l’Ours), until we cross the Broye at the western edge of the medieval town of Moudon (near the “La Brasserie”). 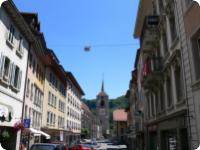 We pass the railway station of Moudon and come to the reformed church St-Etienne, also known as “small cathedral”. The well-preserved basilica has, apart from old paintings, also choir stalls carved in the 16th century, and a French organ from 1764. The forecourt with its chestnut trees invites to a rest. The lower town near the Broye river is specially worth seeing. Also worth seeing is the upper town with the Broye tower (12th century), the castle Rochefort (museum, 16th century), the castle Carrouge, and the Château de Billens.