To the next section Herisau-Wattwil From the port we walk southwards, following the St. James fingerposts through the narrow lanes of the small town to the level crossing of the railway. After the crossing we turn right, walk past the railway station “Rorschach-Stadt”, and then in a south-western direction through an industrial quarter to the Appenzellerstrasse.

Following this road, we leave the town and walk upwards to “Müliberg”, a crossroads of old country lanes where we cross the motorway. After a short ascent, we reach the Sulzberg castle, also called “Möttelischloss”, with its imposing tower. 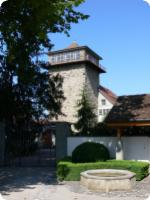 We pass the tower and the castle pond on a small road and come up to the farmstead “Bettleren”. There, the road turns to the right, and above the ponds, leads over to the main road (Bus stop “Vogelherd”). Then, the route follows well-marked paths, partly bypassing the road on its right-hand side, partly on the road itself through the stretched-out village of Untereggen, past the baroque parish church St. Mary Magdalen until up to the village exit (Untereggen-Hinterhof). From the castle pond lying in a hollow, and during the ascent to Untereggen, we enjoy a magnificent view to Lake Constance. At the last houses of Untereggen, we leave the road and turn left onto a roadway that brings us past the farmstead “Schiben” in an increasingly steeper climb to the farmstead on the crest of the hill. 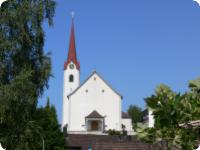 Now we descend the sloping meadow down to the “Martinsbrücke”, steeped in legends. This bridge leads over the Goldach (brook) and the wooded “Martinstobel” (ravine). After the bridge, and to the left, we take the access roadway to the “Schaugenbädli” (bathing pool). Shortly after, however, we turn off to the left onto a forest road that leads us out of the ravine onto flat grass-land. We continue past the first houses of St.Gallen-Neuhof to the bus stop St.Gallen-Wilen. (Note: Pilgrims wanting to avoid walking through the city can take the bus here). The route takes us westwards until the Martinsbruggstrasse which we leave after a short stretch. We pass by the sports ground and traverse the Rehetobelstrasse and arrive at the Bruggwiesenweg. This street at the southern fringe of the town near St.Fiden and along the Hagenbuch forest takes us to the Goldbrunnenweg (with the marvellous “Goldbrünneli”).

This takes us to the Flurhofstrasse, which we follow in a western direction to the Linsebühlstrasse with its church of St. Mary Magdalen, the spire of which indicated the direction so far. Linsebühlstrasse 61 is the address of the pilgrim’s hostel of St.Gallen, operated by the association www.pilgerherberge-sg.ch, phone 0041 71 220 00 62. Continuing westwards, we arrive at the “Spisertor” (gate) and then to the world-famous monastery compound, counting among the heritage sites of world culture. A visit to the baroque cathedral and its library, and a stroll through the lanes of the old city with the numerous old half-timber and oriel window houses, is a must in the journey’s programme. 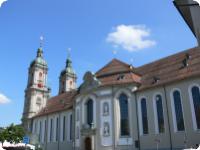 We leave the old city of St.Gallen in a western direction, and on the St.Leonhardstrasse, we come to the railway overpass and the neo-gothic St.Leonhard church there (to the west of the railway station of St.Gallen). After the railway overpass, we turn left onto the Burgstrasse that brings us past “Chrüzbleichi” and the shortcut Turner-/Schillerstrasse to the two castle ponds. We bypass these on the Burgweierweg to the north of the ponds, and the Burgweierweg also leads us to the western town fringe. Conspicuous buildings are the chapel Maria Einsiedeln, and the “Tröckneturm” (tower). Using the Ahornstrasse and the Eisenbahnweg, we come to the EMPA building further to the west, where we traverse to the right onto the Zürcherstrasse. We follow this street through Bruggen, and at the exit of this place, the Fürstenlandstrasse joins the Zürcherstrasse. Before reaching the Fürstenlandbrücke (bridge, shortly after the bus-stop), we turn off to the left to the Kräzerenstrasse that leads us past the Stocken brewery down to the sandstone bridge over the Sitter river, on the opposite side up to the bus-stop Kräzern. 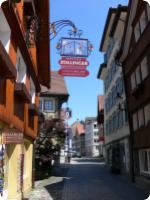 There, we turn off southwards to the left, and across the railway line and past the little castle Sturzenegg up to the natural reserve at Gübsensee (lake) 60m higher up. A hiking path leads us westwards along the former line of the Appenzellerbahn (railway), through a short stretch of wood, up to the Kasernenstrasse which we cross to reach the St.Gallerstrasse. We follow this street until the Schützenstrasse joins it, on which we cross the railway line. Not far away, we turn off into the “Kreckelquartier”. On the Kreuzstrasse, past the cemetery (773m.a.s.l.), we reach the town centre of Herisau. At the pilgrim fountain near the inn “Adler”, we treat ourselves with a well-earned cup of water and terminate the day’s march in the over 1000 years old St.Laurentius church.